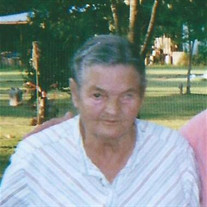 Ms. Winnie Mae Sorrells passed away peachefully at her home on Saturday, December 17, 2016; she was 85. Winnie was born April 24, 1931 in Marshall, Arkansas to the late Allen and Ethel Wooten. She married Harold Sorrells on August 8, 1956 and the couple had two daughters. She and Harold were married 49 years before he passed in 2006. Winnie spent all of her adult life as a homemaker, taking care of her home and her family. She spent many years caring for her grandchildren and great-grandchildren, being the only babysitter that a few of them ever knew. Winnie enjoyed the simple things in life, such as tending to her flowers, and sitting on the couch, watching the birds and deer that often came into the orchard around her house to feed. When her health allowed, she enjoyed fishing, but only from the bank. You would never get her in the boat. She loved to watch re-run after re-run of Reba and could probably speak the lines word for word if you asked her to. Her girls' fondest memories of her are all the times she used to hide from them when they were little. She loved to jump out and scare them. It may not have been too funny to them, but it was hilarious to her. She also had a love for guitar playing, and she shared the gift with her girls. She played and sung, accompanied by Sandra on guitar and Beverly on tambourine. Most importantly, Winnie loved her family dearly. Her grandchildren and great grandchildren were very special to her. She loved being their Mammaw Winnie. She is preceded in death by her parents, Allen and Ethel Wooten, husband Harold Sorrells, brothers, Floy Wooten and Jessie Wooten and sisters, Gertrude Green and Sara Poe. She is survived by her daughters, Sandra Freeman and husband Danny of Wynne, Beverly Duke of Judsonia, sisters, Willie Sullivan and Mary Matthews of Searcy, Shirley Gray and husband Emmon of Pangburn, grandchildren, Amber Vanlandingham and husband Joe, and Josh Freeman all of Wynne, Joseph Duke and Matthew Duke of Searcy, David Duke and wife Rebecca of Conway, and Tonya Duke of Judsonia, and great grandchildren, Alex, Aaron, and Owen VanLandingham, Blaklei Fare, Riley Fare, Nathan Duke, Paige Duke and Piper Freeman. Visitation will be Wednesday, December 22, 2016 from 10 AM until 11 AM at Kernodle Funeral Home with funeral services following at 11 AM. Burial will be in Philadelphia Cemetery in Sunnydale, Arkansas.

Ms. Winnie Mae Sorrells passed away peachefully at her home on Saturday, December 17, 2016; she was 85. Winnie was born April 24, 1931 in Marshall, Arkansas to the late Allen and Ethel Wooten. She married Harold Sorrells on August 8, 1956... View Obituary & Service Information

The family of Winnie Mae Sorrells created this Life Tributes page to make it easy to share your memories.

Ms. Winnie Mae Sorrells passed away peachefully at her home on...

Send flowers to the Sorrells family.