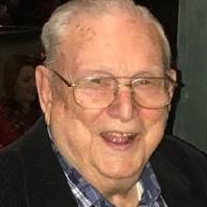 Mr. William “Billy” Claud Kernodle, II, of Wynne, Arkansas, died on Wednesday, November 10, 2021, in Olive Branch, Mississippi, he was 95. Billy was born in Parkin, Arkansas, on February 1, 1926, to the late W. C. Kernodle and Mickie Jones Kernodle. Billy was one when his parents decided to move their family to Wynne, Arkansas, in 1927. They rented a building on Union Avenue and began Kernodle Funeral Home. Billy grew up in Wynne and was a member of the class of 1944 leaving for Southwestern College before graduation. World War II brought the draft. Billy was drafted in July of 1944 and went to serve in the U. S. Navy during the war. He served as mailman on the USS Price. After World War II Billy came back to Wynne where he began to work for Kernodle Funeral Home. In 1947 Billy attended the John A. Gupton School of Mortuary Science and graduated in December of 1947. Not long after returning home Billy married the love of his life, Miss Ora Mae “Phillis” Phillips from Henderson, Tennessee. They had three children, Bill, Kay and Connie whom they cherished. He served as Cross County Deputy Coroner, ran Kernodle Ambulance Service, and taught the Brewster Bible Class at the First United Methodist Church. Billy and Jere Kernodle both owned and operated Monuments by Kernodle from 1959 until July of 2007 Billy enjoyed playing the piano, traveling, and trips to the Casino. He was a member of the First United Methodist Church, Arkansas Funeral Directors Association, National Funeral Directors Association, and Sigma Alpha Epsilon Fraternity. Billy was proud to be a part of the family business. He was a wonderful father and grandfather and compassionate friend. He left us with big shoes to fill and a wonderful legacy. He is survived by his children, Bill Kernodle and wife Lee of Olive Branch, Mississippi, Kay Wittenberg of Metairie, Louisiana, Connie Machado and husband Ramon of Ridgeland, Mississippi, grandchildren, James Wittenberg, IV and wife Allison of Texas, Daniel William A. Machado and wife Jacqueline of Ohio, David Phillip Machado and wife Katie of Alabama, Veronica Choukalas and husband Pete of Germantown, Victoria Genevieve Kernodle of Olive Branch, Laura Gore of Florida, 10 great grandchildren, brother, Jere Kernodle of Wynne, and his special puppy and constant companion, Daisy. Billy is also survived by his many nieces and nephews that he was extremely proud of. He was preceded in death by his parents, W. C. and Mickie Jones Kernodle, wife, Ora Mae “Phillis” Kernodle, sister, Lucile Kernodle McGuire, and sister-in-law, Camelia Kernodle. Visitation will be held on Friday, November 12, 2021, at Kernodle Funeral Home from 5 to 7 PM. Funeral services will be on Saturday, November 13, 2021, at 1 PM. Burial in Cogbill Cemetery with military honors. Memorials may be made to the First United Methodist Church in Wynne, P. O. Box 1007, Wynne, Arkansas 72396 or Dream Flights, 1894 E. William St. 4-451, Carson City, NV 89701 or dreamflights.org.

The family of William Claud Kernodle II created this Life Tributes page to make it easy to share your memories.

Send flowers to the Kernodle family.