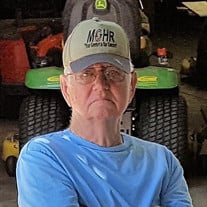 William "Gene" Jarrett of Wynne, Arkansas, died Thursday, August 16, 2018 at NEA Baptist Hospital in Jonesboro, Arkansas. Gene was born in Manila, Arkansas on May 25, 1937. In 1958 he married Mabel Louise Tacker, and she survives him. He... View Obituary & Service Information

The family of William "Gene" E. Jarrett created this Life Tributes page to make it easy to share your memories.

Send flowers to the Jarrett family.