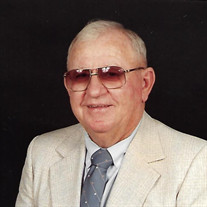 Wesley Nesler, 89, of Little Rock, formerly of Hickory Ridge, died Sunday, November 8, 2020, at Baptist Hospital in Little Rock. Wesley was born on March 14, 1931, to the late O.A. Nesler and Virgie Lee Crangle Nesler. He was a farmer, private pilot and a minister. He was a member of the Aircraft Owners Pilot Association (AOPA), Hickory Ridge Fire Department and the Southwestern Assemblies of God. Wesley was a member of the Feltner Assembly of God in Cherry Valley. Survivors are his daughter Jo'Neil Gray of Little Rock, son, Charles Wesley Nesler and spouse Judy of Marion, grandchildren, Charles, Jr and fiancé Leah, Lisa and spouse Will, Sharla and spouse Johnny, Jason and Amanda. He is also survived by his brother, Jack Nesler of Wynne, sister, Virginia Russell of Hickory Ridge, seven great grandchildren, and one great great grandchild. He was preceded in death by his wife, Melba Nesler, parents, O. A. and Virgie Nesler, brother, Oneal Nesler and beloved companion, Fern Brimhall. Visitation will be held on Wednesday, November 11, 2020, at Kernodle Funeral Home from 3 pm until 5 pm. Graveside services will be held on Thursday, November 12, 2020 at 2 pm at Lewis Cemetery.

The family of Wesley Nesler created this Life Tributes page to make it easy to share your memories.

Send flowers to the Nesler family.