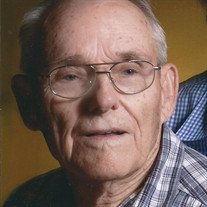 Mr. W. G. Tate of Wynne, Arkansas died Monday, January 2, 2017 at CrossRidge Community Hospital; he was 90. Mr. Tate was born on October 4, 1926 in Guys, Tennessee to W. H. Tate and Lora Christine Nimo Tate. In 1948, W. G. married Daisy Winters and she survives him. He was a retired bus driver for the city of St. Louis, Missouri. He played instruments and loved to sing. W. G. served his country in the U. S. Army. He was a member of Union Avenue Baptist Church. He is survived by his wife, Daisy Kathleen Winters Tate of Wynne; grandchildren, Jasen Tate Creek of Texarkana, Texas and Janey Lora Creek of Jacksonville, Florida. He was preceded in death by his daughter, Jody Kathleen Tate Creek, and his brothers and sisters, Ethel, Beatrice, Edith, Floyd, Raymond, Fred, Ray, Allen, and Arthur. Visitation will be Wednesday, January 4, 2017 at Kernodle Funeral Home from 10 AM until 11 AM, with funeral services following at 11 AM. Burial will be in the Arkansas State Veteran's Cemetery at Birdeye with full military honors.

The family of W. G. Tate created this Life Tributes page to make it easy to share your memories.

Send flowers to the Tate family.