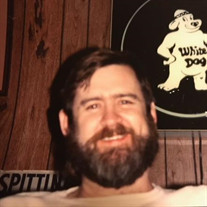 Talmage Van Spence, age 66, of Wynne, AR passed peacefully from this world on Saturday evening, January 13th, 2018. He was born in the Wynne on August 12th, 1951 to T. O. and Mar-Jo Spence of Wynne. Despite a car-wreck leaving him a paraplegic and requiring a wheelchair at age 16, he graduated with his class from Wynne High School in 1969. A music lover from an early age, he worked as a disk-jockey at KWYN in Wynne during his last 2 years in high school. He attended Arkansas State University and started a record and tape store named White Dog during his sophomore year. Upon graduation, he branched White Dog into home and automotive stereo systems and some of the first giant screen projection TVs. Branching into concert promotion and as a ticket sales vendor in the early 1970s, White Dog quickly became an iconic hub of the music scene for Northeast Arkansas with people of all ages. Van “White Dog” Spence loved people and developed a loyal following of customers from college kids to many of Jonesboro’s business movers and shakers. Van opened a second White Dog store in Fayetteville, AR and later Hog Dogs in the former Indian Mall. He enjoyed reflecting back on the many talented and “hip” men and women who had worked in the stores over the years and the musicians he came to know during this time. He sold the stores in the 1980s and moved to Little Rock for a few years before moving back to his favorite place, the family lake house and woods at Hunter’s Rest Lake right outside of Wynne. There, he enjoyed watching raccoons, squirrels, and flying squirrels that he fed on the deck. He had floor to ceiling windows and a glass door that allowed him to watch the large number of raccoons that visited every night and even during the day. Despite being wheelchair bound, in his younger years Van was active in outdoor sports. He enjoyed duck hunting on the family farms, trout fishing on the Norfork and White Rivers, whitewater canoeing, camping, and off-roading in his 6-wheel ATV. He enjoyed driving across the country visiting with old friends and seeing national parks. In his youth, he had been very involved in the Boy Scouts and served on camp staff at Camp Cedar Valley at Hardy. He was very proud that before his wreck he had completed trips to the Philmont Scout Ranch in Cimarron, New Mexico, the Charles L. Sommers Wilderness Canoe Base in Ely, MN, and the 1964 National Scout Jamboree at Valley Forge, PA. In later years he completed the Master Gardeners program, volunteered with the Cub Scouts, and enjoyed reading to classes at the Wynne Primary School. Van was noted for being non-judgmental of others and was always willing to do anything he could to help a friend in need. Van was preceded in death by his parents and by his brother-in-law Stan Langley. He is survived by one sister, Sharon Spence Langley of Jonesboro, AR, and his “baby” brother Greg Spence and wife Alisa. Van loved his niece Katie Langley of Chicago and was especially close to his two nephews, Tal and Cole Spence of Wynne. Van was blessed to have a truly phenomenal friend and caregiver, Jazmine Mathis of Forrest City, who became a part of the whole Spence family. There will be visitation from 2:00 to 3:00 on Sunday, January 21st in the Martha Murray Hall at First United Methodist Church of Wynne followed by a brief Celebration of Life ceremony. For those wishing to leave a lasting memorial, the family suggests making a donation to the Cross County Library or the Good Shepherd Center in Wynne or a charity of your choice. Kernodle Funeral Home is in charge of arrangements. You may sign an online guest book at www.kernodlefh.com

Talmage Van Spence, age 66, of Wynne, AR passed peacefully from this world on Saturday evening, January 13th, 2018. He was born in the Wynne on August 12th, 1951 to T. O. and Mar-Jo Spence of Wynne. Despite a car-wreck leaving him a paraplegic... View Obituary & Service Information

The family of Talmage Van Spence created this Life Tributes page to make it easy to share your memories.

Send flowers to the Spence family.