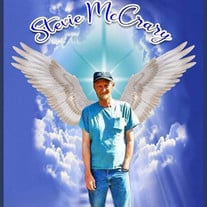 Mr. Steven Daniel "Stevie" McCrary, 62, of Trumann, Arkansas, died on Sunday, January 10, 2021, at St. Bernard's Regional Hospital. Stevie was born in Wynne, Arkansas, on January 21, 1958 to the late Thomas J. and Ila Mae Horton McCrary. He worked as was an over the road truck driver and enjoyed hunting, fishing, and working on lawnmowers. Stevie served in the Army National Guard and was of the Pentecostal faith. He married Bridgette Davis Garren in 2017 and she survives him. He is also survived by his daughter, Sabrina McCrary of Trumann, son, Arron McCrary of Trumann, brothers, Ralph McCrary of Pontotoc, Mississippi, Tommy McCrary of Wynne, T. J. McCrary of Forrest City, James McCrary of Wynne, and John "Bo" McCrary of Wynne, sisters, Mary Lou Glass of Hickory Ridge, Martha Like of Wynne, Ruby Douglas of Vanndale, and Virginia Shepherd of Colt. He is survived by his grandchildren, Devon Stracener, Derrick Stracener, Clay Bratton, and Jayden Shadegg. He was preceded in death by his brother, David McCrary, Sr. and parents, Thomas J. and Ila McCrary. Visitation will be held on Thursday, January 14, 2021, at Kernodle Funeral Home, from 6 to 8 PM. Funeral services will be Friday, January 15, 2021, at 1 PM at Kernodle Funeral Home with Bro. Brian Frames and Bro. Jason Douglas officiating. Burial will be in Harris Chapel Cemetery.

The family of Steven Daniel "Stevie" McCrary created this Life Tributes page to make it easy to share your memories.

Send flowers to the McCrary family.