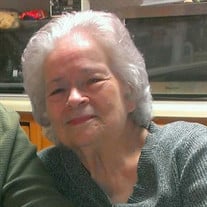 Shirley Fay Ziegenhorn Dye, 86, of Wynne, died on Thursday, January 27, 2022, at CrossRidge Community Hospital. Shirley was born on September 20, 1935, to the late Oral and Pauline Lawrence Ziegenhorn. She was a 1953 Wynne High School graduate. Shirley continued her education at the Commercial Business School of Memphis and graduated with a degree in bookkeeping. She went on to work at Glen Ford Motor Company for 20 years and for the First United Methodist Church as the secretary for 20 years. Shirley was a past member of Union Avenue Baptist where she played piano. She was an active member of Wynne Baptist Church. She had a beautiful smile and loving soul. Shirley is survived by her daughter, Paula Dye of Wynne, sister-in-law, Nina Ziegenhorn of Morton, Arkansas, sister-in-law, Mary Ann Harrell of Wynne, numerous cousins, nephews and nieces. Shirley was preceded in death by her parents, Oral and Pauline Ziegenhorn, husband, Billy John Dye in 2017, son, James Gaylon Dye in 2016 and her brother, Edmond J. Ziegenhorn. Services will be held on Monday, March 28, 2022, at 11 AM at the Arkansas State Veterans Cemetery at Birdeye.

The family of Shirley Fay Ziegenhorn Dye created this Life Tributes page to make it easy to share your memories.

Send flowers to the Dye family.