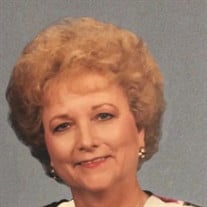 Mrs. Sarah Fay Thomas, 84, of Wynne, Arkansas, died on Saturday, December 28, 2019, at the NEA Hospital in Jonesboro, Arkansas. Sarah was born in Wynne, Arkansas, on February 24, 1935, to the late Arthur McCammon an Sarah Coleman McCammon. She married Malvin Thomas in 1953. They had three children, Lynn, Brenda and Terry. She was a business woman, having owned several businesses in Wynne. Sarah was a devoted grandmother to her grandchildren and great grandchildren. She was a member of the Church of Christ. She is survived by her daughters Brenda K. Spencer of Lemay, Missouri, Lynn Kidder and husband Rick of Wynne, grandchildren, Cori Cable Kidder, Jesse Stevens Thomas, Rena Lara Velazco and three great grandchildren. She is also survived by her siblings, Hazel Call, Shirley Ball, A. T. McCammon, Patricia "Pat" Hill, Paul McCammon, Darrell McCammon, Ricky McCammon, Danny Ray McCammon, Linda Grantham, and Juanita White, and a host of nieces and nephews. She was preceded in death by her parents, husband, Malvin Thomas in 2006, son, Terry "Albie" Thomas in 2013, daughter-in-law, Ruby Thomas in 2018, and siblings, Ernest McCammon, Clarence Brewer, Ruth Ball, Dorothy Murphy, Retha Sullivan, Karen Carter, and Earline Bledsoe. Visitation will be held at the Wynne Church of Christ on Monday, December 30, 2019 from 10 AM until 11 AM, with memorial services following at 11 AM. A private burial will be held at a later time. Kernodle Funeral Home is in charge of arrangements.

The family of Sarah Fay Thomas created this Life Tributes page to make it easy to share your memories.