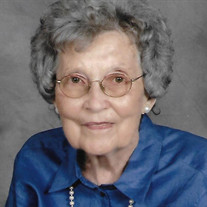 Mrs. Sarah Ann Anderson Fowler of Wynne, died Monday, February 19, 2018 in Jonesboro. Sarah was born to the late Forrest Anderson and Gertie Maupin Anderson on October 15, 1917 in Wynne, Arkansas. Sarah married Otis Fowler in 1933. They raised their five children, Imogene, Mary, Rita, Joyce and Wayne with patience, discipline and love. Sarah enjoyed loving her grandchildren. She was a faithful member of Union Avenue Baptist Church and helped prepare the food for meals at the church, she also She worked with the Good Shepherd Center and loved traveling, gardening and sewing. Survivors are her children, Imogene Thomas of Wynne, Mary Henderson and husband Bilroy of Wynne, Rita Williams and husband Earl Dean of Wynne, Joyce Anderson and husband Danny of Eades, TN, Wayne Fowler and wife Linda of Wynne, nine grandchildren, 16 great grandchildren and 7 great-great grandchildren. She is also survived by her sister, Helen Pruitt of Greenbriar and brothers, Jack Tapley of Ozark, Missouri and Bobby Tapley of Memphis. She was preceded in death by her parents, Forrest and Gertie Anderson Tapley, husband, Otis Fowler in 1980, grandchildren, Randal Henderson and Bert Thomas, sister, Leta Hunt and brothers, Charles Tapley and Arthur Anderson and son-in-law Gilbert Thomas. We are sincerely grateful for every caretaker that helped take mother over the years. Visitation will be held on Thursday, February 22, 2018 at Kernodle Funeral Home from 10 AM until 11 AM. A funeral service will follow at 11 AM at Kernodle Funeral Home with burial in Cogbill Cemetery. Memorials may be made to St. Jude's, Memorial and Honor Gifts P.O. Box 1000, Dept. 142, Memphis, TN, 38148-0142 or [email protected] Kernodle Funeral Home is in charge of arrangements.

The family of Sarah Ann Anderson Fowler created this Life Tributes page to make it easy to share your memories.

Send flowers to the Fowler family.