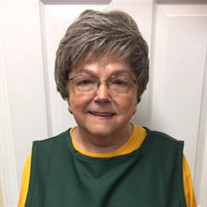 Sandra Kay Tucker Henson was born on April 27, 1949 to the late Rev. Jewel Tucker and Nedrine Tucker in Helena, AR. Sandy was 71 when she started her new life in Heaven on Thursday, December 10, 2020. She was a graduate of Central High School in Helena, AR. She attended Southern Baptist College (now Williams Baptist University) in Walnut Ridge, AR. While at college she met and married Gary R. Henson on November 16, 1968. They were happily married for 52 years. Miss Sandy, as she was known, served the Lord faithfully for 51 years as a Pastor’s wife; the last nine and a half years at Union Avenue Baptist Church in Wynne. She loved to sing and in her younger days had a voice like Sandi Patty. She loved planning a trip to Branson for people from Union Avenue Baptist Church and other friends each year. She was also known as “The Pie Lady” because she made the absolute best Fried Pies. Before retiring she worked as a bank teller where she made lifelong customer friends. She was preceded in death by her parents, Rev. Jewel Tucker and Nedrine Tucker Sumners, her stepfather, Frances Sumners. Two brothers, David Tucker and Bobby Tucker. Sandy is survived by her husband Bro. Gary Henson of the home. Their daughter Debbie Heiman (Mike) of Swanwick, IL. Their son, Gary Henson II (affectionately known as G2) of the home. One brother Jewel Tucker Jr. of Helena, AR. One sister-in-law, Barbara Tucker of West Helena, AR. Six grandchildren: Whitney Bryan (Casey); Britney Henson, Tucker Heiman (Shana); Travis Heiman (Fiancé Rayna); Jeremiah Henson, and Paige Henson and 11 great grandchildren. Sandy is also survived by many nieces and nephews, cousins, many friends, and her church family. Graveside services will be held at 11 AM on Saturday, December 12, 2020, at Cogbill Cemetery with Rev. Robert Crockett officiating. Kernodle Funeral Home is in charge of arrangements. Memorials may be made to Union Avenue Baptist Church.

Sandra Kay Tucker Henson was born on April 27, 1949 to the late Rev. Jewel Tucker and Nedrine Tucker in Helena, AR. Sandy was 71 when she started her new life in Heaven on Thursday, December 10, 2020. She was a graduate of Central High School... View Obituary & Service Information

The family of Sandra K Henson created this Life Tributes page to make it easy to share your memories.

Send flowers to the Henson family.