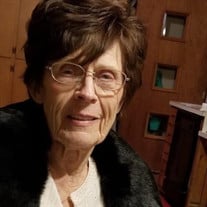 Grace Rozene Whitby was born February 15, 1942 in Wynne, Arkansas and passed away on October 23, 2020 at the age of 78. She lived most of her life in Wynne. Rozene played piano and was a charter member and the pianist for the Union Avenue Baptist Church for several years. Before that she was the pianist at the Fitzgerald Crossing Baptist Church. Rozene graduated from the Memphis School of Commerce in 1961. She began her career as a teller for the First National Bank in Wynne and soon married Charles Whitby from Vanndale, Arkansas. Charles was drafted into the Army and served most of his commitment in Fairbanks, Alaska. She accompanied him and they were there for several months. In 1967, when their first child, Hugh, was four months old, Rozene, Charles, and Hugh were in an automobile accident. Rozene suffered a spinal cord injury, resulting in paralysis from the chest down. She spent months in rehabilitation in Memphis, Tennessee. Determined to live a full and normal life, she set about raising her son from her wheelchair. She and Charles built a home fully accessible to her wheelchair and to accommodate her physical limitations. In 1969, Rozene and Charles had a second child, Lorie. Life was normal for the children because Rozene was determined to make it so. She made sure her children were involved in all the normal activities (e.g., cub scouts, brownies, church and school activities, etc.). In addition to caring for her two children, she maintained her home and cooked every meal for her family. She drove with the help of hand controls. She was busy in local civic groups and served as PTA president while her children were in primary school. She was once named Wynne B & PW Woman of the Year. Her greatest accomplishment may very well have been how amazingly normal she made life for her and her family. After her children graduated from college, Rozene enrolled in and graduated from college. Rozene survived breast cancer. Charles passed away in 2001 after their children were grown and out of the house. She remained at home, living independently and keeping herself busy in the community and being Nana to her grandchildren. She volunteered at the Cross County Museum. She pursued a long-held passion for writing. She published two children’s books and numerous short stories and essays. She recently became concerned that some of her fellow widow friends from her church were not getting out enough, so she organized a local ministry for widows to meet every other week or so for lunch. Rozene was preceded in death by her parents, Junior Deese and Lorie Bryant Deese and her husband Charles. She is survived by her two children, son Hugh Whitby and his wife Kandi; daughter Lorie Whitby and her husband David Lange; three grandsons, Chance Whitby, Jacob Whitby-Lange and his fiancé Jessica Hill, and Luke Whitby-Lange; one great granddaughter, Harper Whitby and Harper’s mother, Kati; and Rozene’s brother Mackie Deese. Rozene loved her Union Avenue Baptist Church home and also found comfort and inclusion by the ministry of St. Johns’ Lutheran Church in Lafe, Arkansas. Pastor Aaron Neugebaur of St. John's Lutheran Church will officiate the grave side service at Cogbill Cemetery in Wynne on Monday, October 26, 2020 at 1 PM. All friends and family are welcome to attend. Visitation will be at Kernodle Funeral Home in Wynne from 10 AM until 11 AM on Monday, October 26, 2020. Per State of Arkansas COVID-19 directive, face coverings are required for any indoor gatherings, please always maintain social distancing.

Grace Rozene Whitby was born February 15, 1942 in Wynne, Arkansas and passed away on October 23, 2020 at the age of 78. She lived most of her life in Wynne. Rozene played piano and was a charter member and the pianist for the Union Avenue... View Obituary & Service Information

The family of Rozene Whitby created this Life Tributes page to make it easy to share your memories.

Send flowers to the Whitby family.