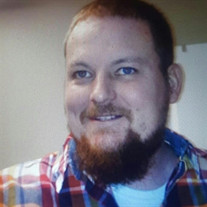 Ronald Lee Davis of Forrest City, Arkansas, died Thursday, November 3, 2016 in Forrest City, Arkansas; he was 36. Ronald was born in West Memphis, Arkansas, on September 28, 1980, to D. F. Davis and Ruby Powell Davis. He was a Senior Officer Specialist at the Federal Bureau Department of Corrections in Forrest City, Arkansas. He loved the Arkansas Razorbacks and wood working. He is survived by his father, D. F. Davis and wife Margaret of Cherry Valley, brothers, Tracy Vance of Palestine, Shannon Davis of Addison, Texas, sisters, Kim Farrell of Palestine, and Becky Andrews of Sedlia, Missouri, and several nieces and nephews. He was preceded in death by his mother, Ruby Powell Davis. Graveside services will be held Monday, November 7, 2016, at 2 PM at Catlett Cemetery.

The family of Ronald Lee Davis created this Life Tributes page to make it easy to share your memories.

Send flowers to the Davis family.