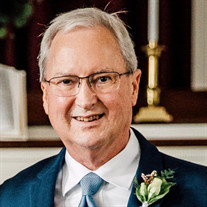 Dr. Robert Andrew Hayes, Jr. of Wynne passed away Monday, October 18, 2021. Rob was born in Wynne, Arkansas, to Dr. Bob and Ann Hayes on November 30, 1954. He was a graduate of the 1973 class of Wynne High School. After high school, Rob attended the University of Mississippi and graduated in 1977 before attending the University of Arkansas Medical School. It was while in medical school that he met Retha Woodall of Little Rock, whom he married in 1981. From 1981 to 1984 Rob completed his residency in Family Practice at John Peter Smith Hospital in Fort Worth, Texas. Rob and Retha moved to Wynne in 1984 where Rob followed in his father’s footsteps and went into family medicine. Dr. Hayes was in his 38th year of practice at Wynne Medical Clinic, touched countless lives, helped generations of patients and was loved by many. Rob was Board Certified in Family Medicine and a Fellow of the American Academy of Family Physicians. Rob and Retha have three children, Whitney, Drew, and Emry Hayes. Rob was Assistant Editor of the Ole Miss yearbook, a member of Phi Delta Theta Fraternity, Order of Omega, Phi Kappa Phi, Omicron Delta Theta, the First United Methodist Church of Wynne, served on the Wynne School Board for 10 years, was an avid woodworker, golfer, and banjo player. He is survived by his wife of 40 years, Retha, and his children, Whitney Hayes Carter and husband Matt, Drew Hayes, Emry Hayes, sister Lee McKnight and husband Rodney, niece Morgan McKnight Wyatt and husband Chase, nephew Taylor McKnight and wife Hillary and bonus grandchildren Will and Aubrey Carter. He was preceded in death by his parents, Dr. Bob Hayes and Ann Hayes Cooper, and his stepfather Jere Cooper. The service will be performed by Reverend Matt Carter. Pallbearers are Rodney McKnight, Dan Fiscus, Danny Glenn, Dr. Willard Burks, Dr. Trent Beaton, Dr. Jake Cathey, Dr. Stan Bradshaw, Dr. Beth Bradshaw and Dr. Jeremiah Nugent. Memorials may be made to the First United Methodist Church of Wynne. A service celebrating the life of Dr. Robert Hayes will be held at 11 AM on Friday, October 22, 2021, at the First United Methodist Church in Wynne. Kernodle Funeral Home is in charge of arrangements. You may sign an online guestbook at www.kernodlefh.com

Dr. Robert Andrew Hayes, Jr. of Wynne passed away Monday, October 18, 2021. Rob was born in Wynne, Arkansas, to Dr. Bob and Ann Hayes on November 30, 1954. He was a graduate of the 1973 class of Wynne High School. After high school, Rob... View Obituary & Service Information

The family of Dr. Robert "Rob" Andrew Hayes Jr. created this Life Tributes page to make it easy to share your memories.

Send flowers to the Hayes family.