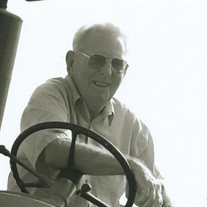 Robert Dallas (Bobby) Turner died at Baptist East Hospital in Memphis, Tennessee on Monday, April 11, 2016. Bobby was born January 27, 1926 in Crockets Bluff, Arkansas to Henry Harmon and Bessie Dallas Turner. His mother passed away when Bobby was a young boy, and he was raised with one sister, Cora Lee, and three brothers, Henry, Edgar (Chink) and Lawrence. His father, Henry Harmon Turner was one of the first Arkansas farmers to grow rice. In 1942, the family moved to Cross County from Crockets Bluff. The family farmed west of Harrell’s Corner for Piggy Rolfe for two years and then moved to the John Brown Farm. In 1946, Bobby’s dad, Henry Harmon, purchased land west of Wynne near the L’Anguille River in the McElroy Community, which became the Turner Farm, where Bobby farmed for nearly 70 years. Bobby Turner joined the Army in 1946 and served in Japan immediately following WWII as a telephone lineman. Upon return to Cross County Bobby was offered a job with the telephone company but chose to farm with his father. He and Dorothy Jane Brooks began seeing each other and married in January 1949. Bobby and Dot lived on the family farm and had one son, Robert Brooks Turner. Dot preceded Bobby in death in 2013 after 64 years of marriage. Bobby was a 32nd Degree Mason, a member of the Rensellear Vann Lodge # 494 in Wynne and he was a Shriner. He leaves his son, Brooks and wife Kathi Caldwell Turner, granddaughter and husband Kerri Brooke and Mike Stevenson and one grandson, Kevin Harmon Turner, and one great grandson, Branan Brooks Stevenson. Bobby also leaves his extended honorary family, descendants of Carl and Rachel Dildine, and Beth Bridges Dildine. Graveside services will be held Wednesday, April 13, 2016 at 2 PM at Cogbill Cemetery. A memorial service will follow at the McElroy United Methodist Church following the graveside service at 3 PM. The family asks in lieu of flowers for memorials to be made to McElroy Methodist Church.

The family of Robert "Bobby" Dallas Turner created this Life Tributes page to make it easy to share your memories.

Send flowers to the Turner family.