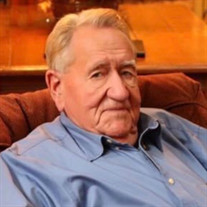 Mr. Riley Paul Ellis, Sr. of Wynne, died Sunday, January 30, 2022, at his home. Riley Paul was born in Wynne, Arkansas, on February 26, 1937, to the late Berger Rivers Ellis and Laurel Jewel Brown Ellis. On June 5, 1955, he married Barbara Ann Davis. They had five children, Paul, Donna, Robin, Lori and Merikay. He was a farmer, owned and operated a trucking company and a jack of all trades. At one time he was running 14 trucks, coast to coast. Later in life he loved that he was able to share his work with Paul. He enjoyed this time in his life. Riley Paul’s work ethic was like none other. He wanted to get up every day to do something. He was a true intentional person in every aspect of his life. He made time for people. Never met a stranger, had a remarkable memory and always ready to take a picture or show you a picture from his phone. He never missed a chance to tell people how wonderfully blessed he is, he loved sharing that. He always ended a phone call by sharing Bible scripture that he had read, a devotional, or reminding you how blessed you were in the things God had done in each life. He is survived by his children, Riley Paul Ellis, Jr. and wife Dallas of Wynne, Donna Imboden and husband Pete of Wynne, Robin Ellis and husband Paul, of Astoria, NY, Lori Taggart and husband Alan of Augusta, Arkansas, and Merikay Campbell and husband Watty of Houston, Texas, a newfound friendship and love, “Ms.” Esther Witcher, and Aunt Nina Spencer. He is also survived by his grandchildren, Harrell Brawner, III, Pete Imboden V (Cara), Lyle Brawner, Beau Brawner, Ali Imboden (fiancé Randy Thomas), Kade Haygood, Hayden Campbell, Tori Haygood (fiancé Zach Coats), Meri Clinen Campbell, Riley Ellis and Parker Ellis, great grandchildren, Jayden Burton, Addlee Brawner, Ava Imboden, Monroe Cuble, Pete Imboden VI and Summer Imoden. He was preceded in death by his parents, Berger and Laurel Ellis, wife, Barbara in 2016, brother, Ira Ellis and sister, Gloria Thomas. Memorials may be made to Ellis Chapel Cemetery, 608 Hwy 193, Wynne, Arkansas or The Bridge Church, 209 Merriman Ave, Wynne, Arkansas. Visitation will be held on Wednesday, February 2, 2022, at Kernodle Funeral Home from 1 to 2 PM with funeral services following at 2. Burial will be in Ellis Chapel Cemetery. Kernodle Funeral Home is in charge.

The family of Riley Paul Ellis created this Life Tributes page to make it easy to share your memories.

Send flowers to the Ellis family.