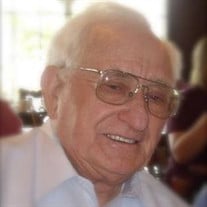 Richard Ferrell Brown Sr. passed away on February 18, 2020 at Northeast Arkansas Baptist Medical Hospital in Jonesboro, AR. Richard was born on October 25, 1925, to William Paul Brown and Georgia Holt Brown in the Hamlin community west of Wynne. Growing up on the family farm, he had a Grit paper route on Sundays. He rode his bicycle the full 50-mile route. After he graduated from high school, he taught at the Charles Ellis school until he joined the Army in 1944. Richard served in the European theater and was a Purple Heart recipient. After his discharge in 1946, he returned to Wynne and began farming. He loved to farm until his retirement in 1985. He then worked for Holland Hunter Motors in Wynne. Richard then worked with Mr. Hunter in the used car business. He then owned and operated Brown Auto Sales. Richard also worked a few years at Walmart in Wynne as the service department manager. In the past eleven years, Richard delivered parts for Hobb’s Equipment in Colt, AR. Richard enjoyed staying busy no matter what he was doing. He was a great people person and enjoyed visiting with everyone. He was a dedicated and longstanding member of the First United Methodist Church. He inspired a great work ethic and good and clean living in his family. The family had an unsurpassed level of love and respect. Richard was an avid bowler for the last 41 years and was a regular in the Thursday night leagues. He was preceded in death by his parents, his siblings Laurel Ellis, Carson Brown, William Paul Brown, Beryl Thomas, Doyl Brown, Mildred Bostic, and Doris Kerksieck. Richard is survived by his wife of 71 years, Imogene Smith Brown of the home, his children Dr. Richard Jr. and Gloria Brown of Fayetteville AR, Dwight and Beth Brown of Wynne AR, and Dr. Dianne and Steve Baer of Fayetteville AR, and his sister Nina Spencer of Wynne AR. He is also survived by nine grandchildren: Nathan Brown, Hayley Morman, Megan Uttley, Kandi Whitby, Jessica Adams, Dixie Walker, Rachel DeCarolis, Mary Beth Williams, and Gregory Stafford. Also survived by twelve great-grandchildren and one great-great-grandchild on the way. At the request of the family, in lieu of flowers, it is requested that memorials be made to either the First United Methodist Church of Wynne, P. O. Box 1007, Wynne, Arkansas 72396 or Cross County Historical Museum. P. O. Box 943, Wynne, Arkansas 72396. Visitation will be held at Kernodle Funeral Home Thursday, February 20, 2020, from 6 to 8 pm. Funeral services will be held on Friday, February 21, 2020, at 11 am, at the First United Methodist Church with burial in Ellis Chapel Cemetery.

The family of Richard Ferrell Brown Sr. created this Life Tributes page to make it easy to share your memories.

Send flowers to the Brown family.