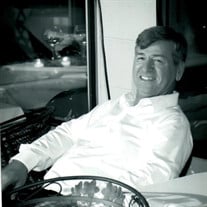 Philip Edward Thompson, 75, of Wynne, died on Monday, October 18, 2021, at Forrest City Medical Center. Philip was born in Wynne, Arkansas, on October 29, 1945, to the late Edward Thomas Thompson and Audrey Mae Ridge Thompson. He married Liz McMickle in 1979. They had three daughters, Dee Ann, Suzanne, and Laura. He lived most of his life in Cross County and farmed in the Jolly Ellis Community and Cross County. Philip served as a Gideon and was a member of the founding committee that started the Wynne Baptist Wee School. He was a member of First Baptist Church in Forrest City. He is survived by his wife, Liz McMickle Thompson, daughters, Dee Ann Bowman and husband, Chris of California, Suzanne Cook and husband Matt of Wynne, Laura Harris and husband Will of Forrest City, sisters, Margaret Irene Ellis and husband Richard of Tulsa, Oklahoma, Barbara Ann Mugge of Tulsa, Oklahoma, and grandchildren, Allison, Emily, Kylie, Guy, Halle, Eliza and Audrey. He was preceded in death by his parents, Edward and Audrey Thompson and brother, Roger Charles Thompson in 2019.

The family of Philip Edward Thompson created this Life Tributes page to make it easy to share your memories.

Send flowers to the Thompson family.