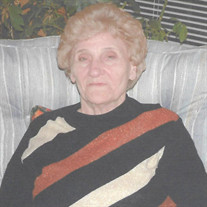 Mrs. Ossie Andrews died Tuesday, January 12, 2021, at Crestpark Nursing Home. Ossie was born in Wynne, Arkansas, on September 6, 1924, to the late Arthur Drury and Sarah Martin Drury. She married Chester Andrews in 1939. They raised four children, Cheryl, Oliver, Lynn and Larry. She began working at Wal-Mart in 1975 and worked there for many years. Survivors are her daughter, Cheryl Phillips and husband Bill of Hickory Ridge, sons, Oliver Andrews and wife Dana of Wynne, Lynn Andrews and wife Joyce of Wynne, 7 grandchildren, 16 great grandchildren and 11 great-great grandchildren. She was preceded in death by her husband, Chester Andrews in 1999, parents, Arthur and Sarah Drury, son Larry Andrews, Sr. and grandchildren, Ryan Andrews and Derek Kemp. Graveside services will be held on Thursday, January 14, 2021, at 10:30 AM at Cogbill Cemetery.  Kernodle Funeral Home is in charge of arrangements.  You may sign an online guestbook at www.kernodlefh.com.

The family of Ossie Lorene Andrews created this Life Tributes page to make it easy to share your memories.