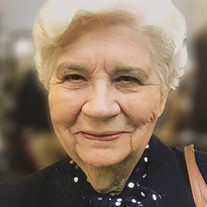 Norma Caldwell, 87, formerly of Pine Bluff and Wynne (AR), passed away on Sunday morning, March 6, 2022, surrounded by her children at Forest Ridge Assisted Living in West Jefferson, NC. Survivors include her three children, Jeffrey, Jon Daniel, and Juliana; her four grandchildren, Alyssa (Gill), Hannah (Munn), Andrew, and Joshua; and her five great-grandchildren, Natalie, Caroline, Eleanor, Margaret, and Noah; and her brother, Gary Wayne Lloyd. Norma was preceded in death by her husband of sixty years, Jimmy; her sister Bobbie (Day); and her grandson Robert. Norma Jane Lloyd Caldwell was born August 26, 1934, in Vanndale, Cross County, Arkansas. She was the daughter of Delmer Bowen Lloyd and Vera Mae Carter. Norma and Jimmy exchanged valentines in the sixth grade and were married December 29, 1954. Norma worked for two major CPA firms and continued her accounting functions at a paper manufacturer and in support of multiple fundraising campaigns for regional non-profit agencies. She was an area representative and national speaker for Stonecroft Ministries; one of the founders of the Christian Women group in Pine Bluff; a Board member for Pine Bluff Symphony; First Vice Regent of the Arkansas DAR and a member of the National Society of Colonial Dames; Twentieth Century Book Club; and Alethia Study Club. She served as a charter member of the Cooperative Baptist Fellowship of Arkansas, two terms as Chair of the Education Committee for her church; Director of the WMU for 5 years; and taught Sunday School for every age from 5 to 90. Her genealogical research spanned 35 years, tracing the Caldwell lineage back to 1569, and tracing her Carter family back to 1510. Her 1,056-page book on the Caldwell family remains on the shelves of multiple State Libraries. Though Norma lived in twenty-four cities during her life, she spent most of her life in Pine Bluff where she was a member of First Baptist Church for nearly 20 years, and in Wynne where she grew up. Her final church membership was with Wynne Baptist, where she made her profession of faith and served as a pianist during her teenage years. Visitation will be held at Wynne Baptist Church Saturday, March 12, 2022, from 1 p.m. until 2:30 p. m. Services will follow at 2:30 p.m. with Rev. Kenneth Thornton and Dr. Brian Bolton of First Baptist Church of Pine Bluff officiating. A private burial will be held at a later time at Crosslawn Cemetery.

The family of Norma Caldwell created this Life Tributes page to make it easy to share your memories.