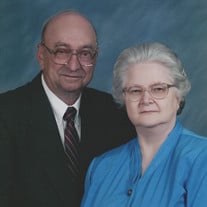 Nina Sitz, 76, passed away in Spring, TX on June 26, 2017 after a lengthy battle with Alzheimer’s. She was born on December 19, 1940 in Red Star, AR. Before she moved to Spring, TX, she lived in West Memphis, AR for 24 years and was a member of Calvary Baptist Church. Nina will be missed greatly by her family and friends for her kindness, gentle nature and loving heart. Nina was a devoted mother, grandmother, and caregiver to many in her family throughout the years. Nina was a switchboard operator for Bell South, the University of Texas at Austin, and the Department of Human Resources in Austin, TX and a homemaker once she retired and moved to West Memphis to be closer to family. Nina was preceded in death by her husband, Giles Sitz in 2015, and her son, Randall Sitz in 1980, and her mother and father, Opal and Bennie Ingle; as well as her brothers, Charles and Kenneth Ingle. Nina is survived by her daughter and son-in-law, Debbie and Darrell Boss of Spring, TX and two grandchildren, Tyler Boss and Lindsey Boss Allen along with her husband Kevin, as well as a great-grandson, Ryker Allen. Nina is also survived by her brother and sister-in-law, Robert and Patricia Ingle of Poplar Bluff, MO, her sister-in-law and brother-in-law, Mary Ann and Bill Fisher, of Fairfield, AR, her sister-in-law, Jo Ella Sitz, of Plano, TX and numerous nieces and nephews. A visitation will be held on Thursday, July 6, 2017 at Kernodle Funeral Home, Wynne, AR. at 10:00 AM with a graveside service immediately following at Cogbill Cemetery in Wynne, AR at 11:00 AM. In lieu of flowers, the family wishes that you contribute to the Alzheimer’s Association or to Calvary Baptist Church in West Memphis, AR.

The family of Nina Sitz created this Life Tributes page to make it easy to share your memories.

Send flowers to the Sitz family.