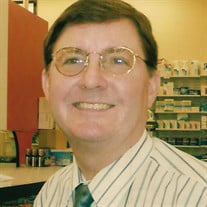 Michael Arthur Mays, age 65, lifelong resident of Wynne, Arkansas, went to be with our Lord on December 15, 2018 at the Flo and Phil Jones Hospice House in Jonesboro. Born on December 17, 1952 in Wynne to Marvin and Marie Mays. Michael was a 1971 graduate of Wynne High School. He went on to attend Arkansas State University and then the University of Arkansas for Medical Sciences at Little Rock, where he earned his doctorial degree in pharmacy. He was a practicing pharmacist for 42 years in Northeast Arkansas. A member of Wynne’s First United Methodist Church. Michael loved playing guitar and singing and shared many good memories of music over the years with those close to him. He also enjoyed hunting with his family and friends and reveled in time spent with his children and grandchildren. Michael married Mary Pierron Mays in 1977 and they had 2 children. He will be greatly missed by his two daughters, Marsha Marie Mays Carwell (Brett) of Jonesboro, Marla Jo Mays of Wynne, as well as by his two cherished grandchildren, Carson Marie Carwell and William Bennett Carwell. Additionally, he is survived by two half-sisters, Dorthy Mays Nunn (Leo) of Lakeview, and Betty Mays Bewley (John) of Jonesboro. Michael was preceded in death by his parents, Marvin Faye Mays and Cora Marie French Mays of Wynne, and a half-brother, Jimmy Marvin Mays (Linda) of Sacramento, California. Visitation will be held on Monday, December 17, 2018 at Kernodle Funeral Home from 1 Pm until 2:30 PM at Kernodle Funeral Home. Graveside services will follow at 2:30 at Crosslawn Cemetery in Wynne. Jim Rhea, Brett Carwell, Dunn Brawner, Corey Dildine, Steve Pierron and Chris Hagler will serve as pallbearers; honorary pallbearers include his fellow pharmacists, Van Cooper and Ken Powell. Those wishing to make a lasting memorial may consider the Flo and Phil Jones Hospice House, 1148 East Matthews Avenue, Jonesboro, AR 72401.

Michael Arthur Mays, age 65, lifelong resident of Wynne, Arkansas, went to be with our Lord on December 15, 2018 at the Flo and Phil Jones Hospice House in Jonesboro. Born on December 17, 1952 in Wynne to Marvin and Marie Mays. Michael was... View Obituary & Service Information

The family of Michael Arthur Mays created this Life Tributes page to make it easy to share your memories.

Send flowers to the Mays family.