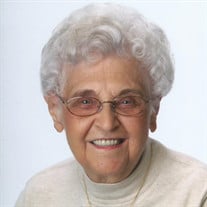 Mary Arlene Sullivan Hogue, 88, of Wynne, Arkansas, died in her home after a lengthy illness on Tuesday, October 6, 2015. She was born March 29, 1927, in the Smith Chapel community outside of Wynne and she remained a resident of Wynne and Cross County her entire life. Arlene graduated from Wynne High School in 1944 and attended Henderson State University for one year. She returned to Wynne and went to work for Southwestern Bell Telephone Company as a switchboard operator. She met Gerald Roy Hogue, who was also working for the telephone company, and they married November 15, 1947. She became a homemaker and mother of two children: Stephanie (Goodart ONeal) born in 1952 and Gregory Roy Hogue born in 1962. Gerald preceded her in death in 1986. When her grandson, Grant Goodart, was born in 1981 she was given the name “Me-Maw” and became affectionately known as “Me-Maw” by her family and acquaintances and care-givers the rest of her days. Arlene was a member of the First United Methodist Church in Wynne, Arkansas, and a charter member of the “Go-getters” Sunday school class. She regularly attended Sunday school and listened to the broadcast of the Sunday Morning Worship service on KWYN. Even during her months of illness, she rarely missed the broadcast of the service. Arlene was preceded in death by her parents, J. D. and Vera Sullivan, and her brothers, Buster Sullivan, Henry Sullivan, Willard Sullivan, and her sisters, Juanita Sullivan Williams and Louise Sullivan Bridges. All of the siblings lived in or around Wynne their entire lives and were a very loving and close-knit family. Arlene, who was the youngest, supported and loved her family until their deaths and stayed close to her many nieces and nephews. Arlene was an avid sports fan. She loved football, baseball, golf, and tennis on television and spent many hours routing for the Razorbacks and St Louis Cardinals. She is survived by her son and daughter-in-law, Gregory and Felicia Hogue of Little Rock, AR, and her daughter and son-in-law, Stephanie and Don Oneal of Wynne, her grandson and wife, Grant and Molly Goodart, and one great-grandson, Benson Goodart of Jonesboro, AR. During her illness, she was cared for by some special people who became “extended family,” Teresa Michael, Donna Claud, Dianne Wigginton, Chelsea Eppes, and Melissa Hess. A “Celebration of Life” Memorial Service will be held at the First United Methodist Church at 3pm Thursday, October 8, followed by a reception in Martha Murray Hall at the church. Those wishing to leave a tribute to Arlene are asked to consider the First United Methodist Church of Wynne.

Mary Arlene Sullivan Hogue, 88, of Wynne, Arkansas, died in her home after a lengthy illness on Tuesday, October 6, 2015. She was born March 29, 1927, in the Smith Chapel community outside of Wynne and she remained a resident of Wynne and Cross... View Obituary & Service Information

The family of Mary Arlene Sullivan Hogue created this Life Tributes page to make it easy to share your memories.

Mary Arlene Sullivan Hogue, 88, of Wynne, Arkansas, died in her...

Send flowers to the Hogue family.