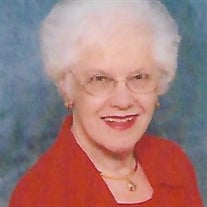 Margaret Chowning Ellis of Wynne, died on Wednesday, November 6, 2019, at Crestpark Nursing Home in Wynne, Arkansas.  Margaret was born on September 30, 1925, in Cherry Valley, Arkansas to Cleve Lee Chowning and Frances "Romaine" Edwards Chowning, who preceded her in death. Margaret moved to Wynne at the age of 2 years. She was a graduate of Wynne High School, President of Student Council, in the Beta Club and National Honor Society and served as class treasurer. Margaret was a true example of a gracious lady, hard worker and volunteer. In the early days of radio, she reported the news on KXJK before KWYN was founded. Her love for publishing began at age 19 when she was hired as the office manager and society page manager for the Wynne Progress, leaving at age 62. Along with her husband, Bill Ellis, they began the Cross County Times Newspaper where she was the co-publisher and owner. In her later years she began working for Kernodle Funeral Home in the late 80's as the Night Hostess. She greeted visitors for more than 30 years, working her last visitation in 2018. She was passionate about her community and for serving. She volunteered at the Good Shepherd Center and served as secretary many years. She was a member of the BPW in Wynne and was Woman of the Year of BPW. She was charter member of the First Christian Church of Wynne, a faithful member of Union Avenue Baptist Church and the Happy Agers Club. She is survived by her daughter, Kay Brown Williams Bridges, of the home, sister, Mary Frances Pitts of Wynne, grandchildren, Kelly Williams of Wynne, Kristina Williams Winkles and husband Mark of Oakland, Tennessee, great grandchildren Callin Hinze of Memphis, Tennessee, and Emma Williams of Tallahassee, Florida. She is also survived by two step-sons, Don and Raney Ellis of Tacoma, Washington, niece, Sherrie Hollis and a host of nieces and nephews. She was preceded in death by her parents, Cleve and Romaine Chowning, husband, William "Bill" Ellis, and three brothers, Warren, Robert and Gene Chowning. Visitation will be held on Saturday, November 9, 2019, at Kernodle Funeral Home from 1 pm until 2:30 pm. Graveside services will be held at Cogbill Cemetery following visitation at 3 PM. In lieu of flowers memorials can be made to Union Avenue Baptist Church.

The family of Margaret Chowning Brown Ellis created this Life Tributes page to make it easy to share your memories.

Send flowers to the Ellis family.