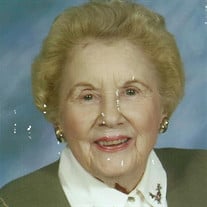 Marjorie Jo (Mar-Jo) VanDalsem Spence of Wynne passed away peacefully at home surrounded by loved ones on Wednesday, November 9th, 2016. She was 92 years old. Mar-Jo was born at home on January 28th, 1924 to Harry Eldridge VanDalsem and Marjorie Jaco VanDalsem of Perryville, Arkansas. She grew up in Perryville where she graduated from Perryville High School and attended Hendrix College in Conway for 3 years, transferring her 4th year to the University of Arkansas at Fayetteville where she graduated with a BA Degree in Elementary Education. Upon completion of her degree, she joined the war effort, working in the office of a war production plant at Camden, Arkansas, until the end of the war. After this she moved to Wynne, Arkansas, and taught 1st Grade in the Wynne Public Schools. She met her future husband T. O. Spence, a 5 year war veteran who had come to Wynne on a year of furlough, at a blind date Canasta card game set up by mutual friends. They instantly hit it off and dated every night for the next 3 months, except for 2 days when they both had the flu, and then were married at the old Methodist Parsonage in Wynne. They would go on to celebrate 50 happy years together. When Mar-Jo moved to Wynne, she quickly came to love the community and become involved in it. She loved music and joined the Wynne Music Club. At the time of her passing, she was the club’s most senior member and was honored with a special award of dedication on Veterans Day in 2014. She was a devout member of First United Methodist Church in Wynne where she taught the kindergarten Sunday School class for over 35 years as well as being a member with her husband of the Go Getters Sunday School Class. At the request of friends, she formed the Cross County Hospital Auxiliary and served in numerous positions, including over 30 years co-chairing the Scholarship Committee, remaining until the hospital became part of the St. Bernards system. She volunteered in many capacities in the community including Cub Scout Den Mother, Brownie Scout leader, member of the Order of the Eastern Star, school volunteer, and was a regular visitor to Wynne's nursing homes up until her last few years. One of her most cherished activities was gathering with her Ladies Coffee Group, an informal group of friends and neighbors with children who met at each other's houses every weekday at 3:30 to drink coffee and share everyday events in their lives. This special group of friends met for over 60 years. Mar-Jo was especially devoted to the city park in front of her house where she and her oldest children planted pine seedlings that are now towering at each end. She was a tireless advocate for maintaining and improving the park and loved spending her golden years in her carport sipping coffee and watching the children playing. In addition to being a homemaker, Mar-Jo was active in business, helping with bookkeeping and accounting at her husband's Gulf gas stations and bulk oil plant, the T. O. Spence Oil Company. She and her husband bought farmland and worked to improve their land. She and her husband served on the board of directors of the Perry County Bank, a small bank started by her father, and upon her mother's passing she was elected to fill her position as Chairman of the Board where she served until its sale in 1980. She was a highly regarded businesswoman with a reputation for fairness and generosity. Mar-Jo was preceded in death by her parents H. E. and Marjorie VanDalsem of Perryville, AR and her son-in-law Stan Langley of Jonesboro. She is survived by her children; Talmage Van Spence, Gregory Glenn Spence (and wife Alisa) of Wynne and her daughter, Sharon Spence Langley of Jonesboro. She is also survived by her three beloved grandchildren; Katherine Eldridge Langley of Chicago, Talmadge Nicholas Spence and Cole Glenn Spence of Wynne. She also leaves a group of long-time loving caregivers: Nelda Boatner, Dusty Stewart, Patricia Stewart, Wanda Diggs, Brenda Goacher, Jazmine Mathis, and Jinnie Pack and Gail Dye. Honorary Pall Bearers include all members of the Go Getters Sunday School Class and the Ladies Coffee Group. Visitation will be Sunday, November 13, 2016 at Wynne First United Methodist Church from 1 to 2 PM in the Martha Murray Hall. Funeral services will follow at 2 PM with burial in Crosslawn Cemetery. For those wishing to make a lasting memorial the family has requested First United Methodist Church in Wynne or the Wynne Music Club.

Marjorie Jo (Mar-Jo) VanDalsem Spence of Wynne passed away peacefully at home surrounded by loved ones on Wednesday, November 9th, 2016. She was 92 years old. Mar-Jo was born at home on January 28th, 1924 to Harry Eldridge VanDalsem and Marjorie... View Obituary & Service Information

The family of Mar-Jo VanDalsem Spence created this Life Tributes page to make it easy to share your memories.

Send flowers to the Spence family.