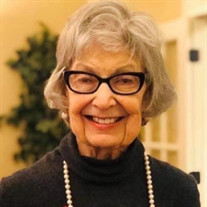 Lynda Byrd Thomas, age 87, passed away on Sunday, January 10, 2021. She was born in Wynne, Arkansas on January 27, 1933, to Beverly Cogbill Byrd and Chester Byrd. She graduated as valedictorian from Wynne High School in 1951, where she was also Homecoming Queen, and received her bachelor’s degree in music with a concentration in organ from Memphis State University (now the University of Memphis) in 1955. There she met the love of her life, Oscar Lloyd Thomas, and married him on December 23, 1955. Before her marriage, she briefly taught music in the Wynne Public Schools, but after her marriage, she moved all over the country with her husband, who was a pilot in the United States Air Force. She loved the travel and experiences of meeting new people and they moved multiple times, living in Florida, Hawaii, Washington, Alabama, North Carolina, Illinois, and upstate New York. She continued her career as a musician and choir director whenever possible, although her career was secondary to her true joy: being a devoted mother to her three children. Upon Oscar’s retirement from the Air Force in 1978, the family moved back to her hometown, Wynne, Arkansas, where she became the choir director at First United Methodist Church of Wynne, although she was a longtime member of Wynne Presbyterian Church. In her spare time, she loved playing bridge and playing music on her grand piano, but also found time to drive her daughter to Memphis for ballet lessons and her sons to Jonesboro for trombone lessons. When Oscar became sick with cancer in early 1996, she dedicated herself to caring for him at home until his death in August, 1997. She then decided to embark on a new adventure by moving to Memphis, where she worked in retail. She loved her city life and had many friends at the Monarch where she lived – her favorite activity was playing poker twice a week with several of the residents there. In 2018, when she could not continue living independently, she moved to Avonlea, an assisted living facility in Tupelo, Mississippi, to be near her daughter. She loved her room there, filled with paintings, photographs, and her favorite glider rocker. She always enjoyed spending time with her children and seven grandchildren. She was preceded in death by her husband, Colonel (retired) Oscar Lloyd Thomas, her parents, her sister, Harriet Byrd O’Neal, and her infant son, Albert Cogbill Thomas. She is survived by her daughter, Beverly Thomas Williams (Whit) of Tupelo, Mississippi, her sons, Charles Christian Thomas (Dawn) of Hernando, Mississippi, and Oscar Lloyd Thomas, Jr. (Lee) of Memphis, Tennessee, and her seven grandchildren, Skyler Thomas of Los Angeles, California, Drew Williams of Oxford, Mississippi, Rachel Williams of Madison, Wisconsin, Sam Williams of Starkville, Mississippi, Trey Thomas of Oxford, Mississippi, Harm Thomas of Memphis, Tennessee, and Ian Thomas of Hernando, Mississippi, as well as nieces, a nephew, and several cousins. There will be a private graveside service held in Wynne, Arkansas at Cogbill Cemetery at a later time.

Lynda Byrd Thomas, age 87, passed away on Sunday, January 10, 2021. She was born in Wynne, Arkansas on January 27, 1933, to Beverly Cogbill Byrd and Chester Byrd. She graduated as valedictorian from Wynne High School in 1951, where she was also... View Obituary & Service Information

The family of Lynda Byrd Thomas created this Life Tributes page to make it easy to share your memories.