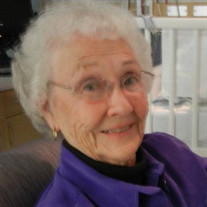 Lula Loreath Settlemire passed away at the age of 90 on February 19, 2018 at Saint Bernards Hospital in Jonesboro, Arkansas. Lula was born in Bold Springs, Tennessee on September 16th, 1927. She was the 7th child of Beulah and Howard Mayberry. The Mayberry family relocated to Bay Village, Arkansas where Lula attended Vanndale High School and met her future husband, James Marion Settlemire. They wed on December 31, 1946. Lula was a Navy wife for 30 years and lived in many different locations, her favorite being Maine where she enjoyed lobster and spaghetti. After her husband retired, they settled back down in Wynne where she picked, hulled, and canned all the things that Marion could dream to plant in their acre garden. She was a prominent member of Union Avenue Baptist church for 40+ years and volunteered at their Good Shepherd Center for over 20 years. Lula loved her family, she loved a good American Flag brooch, was a self-proclaimed “chocoholic” and could tell you the best places to eat catfish within a 30-mile radius. She enjoyed her Gaither’s VHS tapes but on occasion would swap one out for Top Gun. She gave us the weather report when we called by observing her flag in her front yard and we could always count on her call when it was time to set our clocks forward or back. There is not a soul in Wynne who has not seen multiple pictures of her great-grandchildren and knows how proud she was of them. She was a force to be reckoned with and always did it her way. We will miss her terribly and every celebration and milestone will be bittersweet without her at the table waiting for “just a little bit” of cake. Lula was preceded in death by her husband James Marion. She is now also reunited with her six brothers and sisters: Shotwell Mayberry, Alta Mae Mayberry, James Edward Mayberry, Mary Marie Taylor, Odie Delila Woods and Martha Lavern Doss. She is survived by her daughters: Myra Moreno Deacon of Jonesboro, Arkansas and Marcia Jarman of Jacksonville, North Carolina. Her grandchildren: Carlos Moreno of Tampa, Florida, Laura Beck of Memphis, Tennessee, James Rusk of Jacksonville, North Carolina, Alex Moreno of Jonesboro, Arkansas, Jackie Lovitt of Jacksonville, North Carolina, and Catherine Lusby of Jonesboro, Arkansas, and 11 great grand children. Visitation will be held on Monday, February 26, 2018 at Kernodle Funeral Home from 12 until 2 with funeral services following at 2 pm. Burial will be in Crosslawn Cemetery. Memorials may be made to Union Avenue Baptist Church or St. Jude's, Memorial and Honor Gifts P.O. Box 1000, Dept. 142, Memphis, TN, 38148-0142 or [email protected] Kernodle Funeral Home is in charge of arrangements. You may sign an online guestbook at www.kernodlefh.com

Lula Loreath Settlemire passed away at the age of 90 on February 19, 2018 at Saint Bernards Hospital in Jonesboro, Arkansas. Lula was born in Bold Springs, Tennessee on September 16th, 1927. She was the 7th child of Beulah and Howard Mayberry.... View Obituary & Service Information

The family of Lula L. Settlemire created this Life Tributes page to make it easy to share your memories.

Lula Loreath Settlemire passed away at the age of 90 on February...

Send flowers to the Settlemire family.