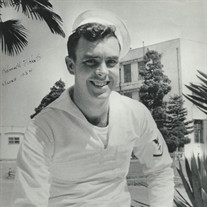 Kenneth Roger Pickett of Wynne, Arkansas died Wednesday, September 14, 2016 at CrossRidge Community Hospital in Wynne, Arkansas, he was 85. Roger was born on February 2, 1931 in Vanndale, Arkansas to Claude Eulysses and Mary Bounds Pickett. Roger was retired U. S. Navy, having served his country during the Korean War and Vietnam. He was a member of Wynne First Assembly of God. Roger is survived by his son, Kenneth Roger Pickett of Daphne, Alabama, daughters, Deena Carter of Collierville, Tennessee, Jeanene Maples of Sheridan, Arkansas, Shera Andrews of Collierville, Tennessee, brothers, Carroll Wayne Pickett of Little Rock, Arkansas, Charles Edward Pickett of Houston, Texas, sister, Wynona Faye Shaver of San Diego, California, 13 grandchildren and 10 great grandchildren. He was preceded in death by his wife, Glendora Pickett in 2015 and daughter, Rebecca Jean Thompson in 2004. Visitation will be Monday, September 19, 2016 at Kernodle Funeral Home from 10:30 until 11:30 with funeral services following at 11:30. A private burial will be in the Arkansas State Veterans Cemetery at Birdeye, Arkansas.

The family of Kenneth Roger Pickett created this Life Tributes page to make it easy to share your memories.

Send flowers to the Pickett family.