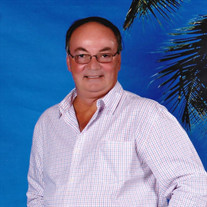 Kenneth "Kenny" Wayne Sparks of Wynne, died Thursday, February 25, 2016 at UAMS Hospital in Little Rock, Arkansas at the age of 57. Kenny was born on January 25, 1959 in Detroit, Michigan to John Frank Sparks and Betty Jo Dailey Sparks Wurst. Kenny had lived in Wynne for the past several years and was a self employed mechanic at J & K Auto in Wynne. He was a veteran of the U. S. Army. Kenny was a member of St. Peter's Catholic Church in Wynne. He is survived by his wife, Joan "JoJo" Hess Sparks of Wynne; daughters, Melissa Dixon of Springfield, MO; Jana Lloyd and husband Jeremy of Wynne; brothers, John Sparks of Heber Springs, AR; Bill Sparks and wife Lanette of Ash Grove, MO; sister, Teresa Norman and husband Michael of Salem, AR; grandchildren, Haley, Makenzie, and Kaleb Dixon. Kenny was preceded in death by his son, Allen Sparks. Visitation will be Sunday, February 28, 2016, from 6 to 7:30 at St. Peter's Catholic Church with Rosary beginning at 7:30. Funeral services will be Monday, February 29, 2016 at 10 AM at St. Peter's Catholic Church with burial in Johnson Cemetery in Wynne, Arkansas.

The family of Kenneth "Kenny" Wayne Sparks created this Life Tributes page to make it easy to share your memories.

Send flowers to the Sparks family.