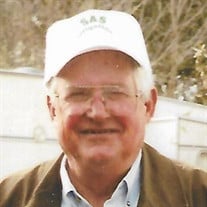 Kelly Eugene McClintock, 80, of Wynne, Arkansas, died on Tuesday, August 27, 2019, at Flo and Phil Jones Hospice House in Jonesboro, Arkansas. Kelly was born on November 6, 1938, to the late William and Elsie Futrell McClintock in Wynne, Arkansas. Kelly was a retired farmer and served on the Cross County Quorum Court from 1979 until 2002. He was a member of Pleasant Hill Baptist church. Kelley is survived by his sister, Regina Bingham of Marked Tree, Arkansas, loving companion Bobbye Blake of Cherry Valley, nephews, Fred Hachtmeyer, Trevis Ligon, Andy Hamilton, and nieces, Becky Smith, and Stacey Langley. He was preceded in death by his wife, Mona Ligon in 2011, daughter, Kimberly McClintock in 1992, and parents, Reg and Elsie McClintock. Visitation will be held on Thursday, August 29, 2019, from 6 to 8 PM at Kernodle Funeral Home. Funeral services will be Friday, August 30, 2019, at 10 AM with burial in Akin Cemetery. Memorials may be made to Flo and Phil Jones Hospice House, 1148 E Matthews Ave, Jonesboro, AR 72401 or to the Pleasant Hill Baptist Church.

The family of Kelly Eugene McClintock created this Life Tributes page to make it easy to share your memories.

Send flowers to the McClintock family.