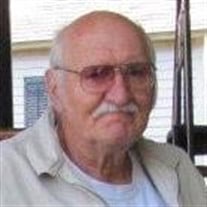 Joseph Edward Lednick, Sr., died on Thursday, June 25,2020 at Baptist Little Rock. Joe was born in Deming, New Mexico, on October 31, 1936, to the late Joseph John Lednick and Mary Hansen Lednick. He grew up in Vashon Island and Cathlamet, Washington. At 17, he entered the United States Navy, serving twice and later the United States Airforce. He retired from the military in 1976 and moved his family to Wynne, Arkansas. He worked for Halstead and for Arkansas State Forestry Commission from which he retired. Joe was raised in the Catholic Church and attended the Wynne Church of God. He is survived by his daughter Lori Lednick-Hayes and wife Hazel of Alexander, Arkansas, son, Joseph Lednick of Wynne, grandchild, Henry Maxwell Lednick-Hayes of Alexander, Arkansas, brother, Charles Lednick and wife Lena, granddogs, Marley, KK, Teagan, Genji and Oscar. He was preceded in death by his wife of 43 years, Carroll Lednick, parents, Joseph Lednick and Mary Hansen, sister, Charlene Kline and granddogs, Molly and Missy. Visitation will be held on Monday, June 29, 2020 at Kernodle Funeral Home from 10 am until 11 am. Funeral services will follow at 11 with burial in Vanndale Cemetery. Memorials may be made to the Vanndale Cemetery, P. O. Box 49, Vanndale, Arkansas 72387 or Pulaski County Humane Society, 14600 Colonel Glenn Rd, Little Rock, AR 72210.

The family of Joseph Edward Lednick, Sr. created this Life Tributes page to make it easy to share your memories.