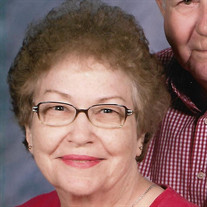 Jewell Christine Tackett, age 80, of Anahuac, Texas, formerly a long-time resident of Wynne, Arkansas, passed away Thursday, August 1, in the company of her family. Jewell was born November 18, 1938 to the late James M. and Girlie M. Dennis of Colt, Arkansas. She graduated from Wynne High School and married Audry (Pete) Tackett in 1956. After living in France during Pete’s eployment in the Army, the couple settled in Wynne, where they raised their 2 children Audie and Kim. She and her late husband, Pete, were married for 57 years before his passing in 2013. Jewell spent more than 60 years in Wynne before recently relocating to Texas to live with her family there. She was a dedicated and hard worker, having obtained her real estate license and working as a realtor in the Wynne area for greater than 30 years. She was a devoted wife, mother and grandmother, very proud of her family and excited to become a grandmother of 4 grandchildren and great-grandmother of 5. Jewell loved holidays and family get togethers, and any time with her family was important to her. She would spend many hours preparing and cooking for her family and friends. Jewell and Pete loved to travel and spent many happy times doing so throughout the US and Canada. She was active in her community and a member of Union Avenue Baptist Church of Wynne. She will be greatly missed by many family and friends. Jewell was preceded in death by her late husband Audry (Pete) Tackett. She leaves behind her son, Audie Tackett and his wife, Gail, of Anahuac, Texas and daughter, Kimberly Tackett, of Colt Arkansas. She leaves 4 grandchildren, Ben Wilson and partner, Vanessa Moreno, of Austin, Texas, April Key and her husband, Michael, of Mont Belvieu, Texas, Andy Tackett, of Dayton, Texas, and Katie Wilson, of Colt, Arkansas. Jewell also leaves 5 great-grandchildren, Riley Wilson, Beaux Richey, Lilah Tackett, Cali Gail Tackett and Amelia Claire Wilson. Visitation will be held at Kernodle Funeral Home, Tuesday, August 6, 2019 from 10 AM until 11 AM with a graveside service immediately following at Loughridge Cemetery in Colt, Arkansas. Memorials may be made to Union Avenue Baptist Church, 1424 E. Martin Drive, Wynne, Arkansas 72396.

The family of Jewell Christine Tackett created this Life Tributes page to make it easy to share your memories.

Send flowers to the Tackett family.