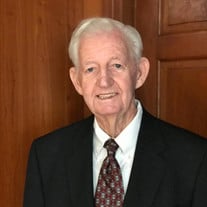 James Levesque “Jim” Shaver, Jr., 93, passed away peacefully at his home in Wynne, Arkansas on Thursday morning, May 27, 2021. Mr. Shaver was a lifelong, dedicated resident of Wynne, Arkansas (Cross County). He was born on November 23, 1927 in his family’s home on Hamilton Avenue in Wynne. He attended Wynne schools and graduated from Wynne High School in 1945. During his time at Wynne High School, he played center for the Wynne Yellowjackets football team, most memorably as a sophomore in 1942. He went on to serve in the United States Navy during World War II. He then graduated from the University of Arkansas School of Law at Fayetteville, where he obtained his Juris Doctorate degree. He earned his attorney’s license in 1951. He entered the practice of law with his father, Bex Shaver, in the law firm of Shaver & Shaver in Wynne, one of East Arkansas’ most prestigious law firms. In 1949, he married the former Bonnie Wood, and they enjoyed 52 years of marriage until her death in 2001. They were loving parents to a son, Jimmy, who died in 1978 and a daughter, Bonnie Sue Shaver Huff, who currently resides in Wynne. They also have two grandsons – Michael and Jimmy – and five great-grandsons – Michael, Evan, Shaver, William and Tanner. Mr. Shaver is lovingly known as “Poppy” to these generations, most of whom were, or currently are, being raised in Wynne or being raised to know and love the community. In 1955, Mr. Shaver was elected to the Arkansas House of Representatives, and served continuously until his retirement in 1994. He served as Co-Chairman of the Joint Interim Senate and House Judiciary Committee, Chairman of the House Judiciary Committee and numerous other committees over the years. He was named an outstanding member of the Arkansas House of Representatives in 1975, and in January of 1977, was voted unanimously by the membership of the House to serve as Speaker of the House for 1977-78. In 1981, he was presented an award for Distinguished Service by the 73rd General Assembly. In 1982, he was recognized as an outstanding alumnus of the University of Arkansas School of Law. He is a former member of the American Bar Association, a past President of the Arkansas Bar Association, and former member of its House of Delegates and the Arkansas Bar Foundation. He received the Arkansas Bar Association’s Award of Merit and Award of Excellence in 1990. He served as legal counsel for the St. Francis Levee District from 1971 until his retirement in 2000 and served as a board member until his death. Mr. Shaver has been active in the Wynne community for his entire life. He served on the Industrial Development Commission of Cross County, and the Eastern Arkansas Development Committee. He is an honorary member and Past President of Wynne Rotary Club, and has been honored as a “Paul Harris Fellow” by that organization. He served for many years on the Board of Directors of The First National Bank of Wynne. He is a lifelong member and Elder of Wynne Presbyterian Church. In 2019, he was honored by the Wynne Yellowjacket Foundation as one of the first members of the Yellowjacket Hall of Fame. Jim enjoyed his hobby of amateur ham radio for many years, and has been in contact with other ham operators from many countries throughout the world. Mr. Shaver is still known as one of the most effective and respected state representatives in our history. During his terms of service, the present District Headquarters of the State Highway Department was built, keeping many jobs in Cross County for years to come. He was instrumental in building roads and other infrastructure in and around Cross County. Additionally, he was influential in the preservation and dedication of Village Creek State Park and Parkin Archeological State Park. Combined with the efforts of Senator Clarence Bell of Parkin, Cross County reaped the benefits of two of the most powerful legislators in Arkansas. Mr. Shaver has been a friend of Presidents and Governors, but he is mostly remembered as being a dedicated friend and selfless leader of countless numbers of Cross County residents for whom he was an advocate and mentor. He has been generous in his contributions of time, talent, energy and resources to make Cross County, Arkansas, an example to all of a selfless and loving community. Mr. Shaver was preceded in death by his wife Bonnie Wood Shaver; his parents The Honorable and Mrs. James Levesque “Bex” Shaver (Louise or “Memama”); his sister Winnie Bob Shaver Smith of Birdeye, Arkansas; and three children, James L. Shaver III and (daughter-in-law) Cathy Campbell Shaver; Donald Shaver and Leta Louise Shaver, all of Wynne, Arkansas. He is survived by his daughter, Bonnie Sue Shaver Huff of Wynne, Arkansas; his grandsons Michael Dwight Huff, Jr. (Lashun Elliott Huff) of Ada, Oklahoma and James Evan “Jim” Huff, Sr. (Elizabeth Malone Huff) of Wynne, Arkansas; five great-grandsons, Michael Levesque Huff of Ada, Oklahoma and James Evan Huff II; Shaver Pogue Huff; William Garcin Huff and Tanner Wood Huff, all of Wynne, Arkansas. Last but not least, he leaves his loving caregiver of the past two years, Ms. Patsy, who cared for him with dedicated, unrelenting determination and pure love until his final moment. In lieu of flowers, the family requests memorials to the Wynne Presbyterian Church, 1735 East Poplar Avenue, Wynne, Arkansas 72396. Visitation will be held on Thursday, June 3, 2021 from 5-7 p.m. at Kernodle Funeral Home. A graveside service will be held on Friday, June 4, 2021 at 10 a.m. at Cogbill Cemetery followed by a Celebration of Life service at 11 a.m. at Wynne Presbyterian Church. Family and friends are invited to join in honoring our Poppy, Mr. Shaver. Kernodle Funeral Home is in charge of arrangements. You may sign an online guestbook at www.kernodlefh.com Services will be streamed live on the Wynne Presbyterian Facebook Page and can be later viewed on Wynne Presbyterian YouTube page. Please maintain a comfortable social distance at indoor gatherings. Although face coverings are not required, they're encouraged for your comfort and safety.

James Levesque &#8220;Jim&#8221; Shaver, Jr., 93, passed away peacefully at his home in Wynne, Arkansas on Thursday morning, May 27, 2021. Mr. Shaver was a lifelong, dedicated resident of Wynne, Arkansas (Cross County). He was born on November... View Obituary & Service Information

The family of James Levesque Shaver Jr. created this Life Tributes page to make it easy to share your memories.

Send flowers to the Shaver family.