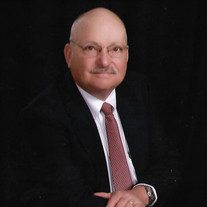 James Larry Hobbs, 77, of Colt, Arkansas went to be with his Lord and Savior on Thursday, December 24, 2020. Larry was born on November 15, 1943 to the late James Lawrence Hobbs and Onice Cox Hobbs Faupel. In 1962, Larry and Mary Katheryn Owens were married. Together, they raised three sons, Larry Dewayne Hobbs, Randell Owen Hobbs, and Shannon Lee Hobbs. Throughout Larry and his wife’s 58-year marriage, they grew a thriving business and watched their family expand. Larry is survived by his wife, Mary Katheryn, his sons Dewayne and his wife Sheryl of Wynne, Randell and his wife Jennifer of Wynne, Shannon of Wynne, and his aunt Joann Hobbs South of Colt. He is survived by his grandchildren, Kendall Hobbs Cox and husband Randy, Kelsey Hobbs, Braxton Hobbs, Grace Hobbs, Carson Hobbs, Ansleigh Hobbs, his great granddaughter Stella Cox, half-brother, Ronald Faupel of Cabot, and half-sisters, Carol Mendel of Little Rock, and Susan Faupel of Illinois. Family was of the greatest importance to Larry; and, he leaves behind a legacy of a large, tight-knit family and a successful family business. Larry began farming right out of high school. After his grandfather’s passing in 1973 and equal share of the inheritance in 1976, Larry used the inheritance as collateral to establish Hobbs Equipment. Following the economic downturn of the 80s, the equipment business saw rapid growth. Now a fifth generation farm family still located in Colt, Arkansas, Larry and his sons have continued a legacy of farming and assisting other farm families in their success. Throughout his years of farming and selling equipment, Larry has touched the lives of countless friends and associates across this country’s farming regions. As he continued to bring his vision to life, Larry never compromised his convictions. He remained steadfast in his faith and looked always to the Lord for guidance. Larry had an enormous heart for missions. He went on 2 separate mission trips to China, both of which he lamented as pivotal moments in his faith. Larry fulfilled Christ’s direction to care for the widows, orphans, the Nation of Israel, and Jewish people; and, he frequently gave to those in need. His legacy of faith has been passed passionately on to his sons and grandchildren and has, no doubt, brought the light of Christ to anyone he encountered. Larry Hobbs was an exemplary man of vision, dedication, and faith. His passing leaves an unfillable gap in many lives; but, we rest assured knowing that he rests with the Savior he so faithfully served. The King is Coming; and, on that day, how we will rejoice to be reunited in Christ. Funeral services will be held on Tuesday, December 29, 2020, at Hobbs Farm Equipment Service Center, 8724 Highway 1 North, Colt, Arkansas at 10 AM. Burial will follow at Cogbill Cemetery. You may view the funeral service on the Wynne Baptist Facebook page. At the end of the funeral service a drive thru viewing will be available. Memorials may be made to Wynne Baptist Church. Arkansas Department of Health guidelines for COVID-19, states that face coverings are required for any indoor gatherings, please always maintain social distancing. Thank you for your kindness and cooperation in following these guidelines. Kernodle Funeral Home is in charge of arrangements. You may sign an online guestbook at www.kernodlefh.com

James Larry Hobbs, 77, of Colt, Arkansas went to be with his Lord and Savior on Thursday, December 24, 2020. Larry was born on November 15, 1943 to the late James Lawrence Hobbs and Onice Cox Hobbs Faupel. In 1962, Larry and Mary Katheryn Owens... View Obituary & Service Information

The family of James Larry Hobbs created this Life Tributes page to make it easy to share your memories.

Send flowers to the Hobbs family.