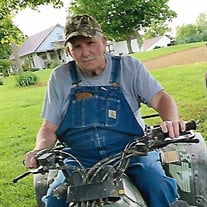 Mr. James Daniel Goe of Bowling Green, Kentucky (formerly of Colt), died on Friday, January 31, 2020, at Greenwood Nursing and Rehab. James was born in Marion, Arkansas, on August 14, 1944, to the late Arthur Birley Goe and Bertha Purcell Goe. He married Susie Armstrong and they had one daughter, Anita. He worked for Halstead for many years, drove gravel trucks and worked for Charlie Rich. He loved hunting, fishing, 4-wheeling, just about anything you could do outdoors. James is survived by his daughter, Anita Odom and husband John of Bowling Green, Kentucky, sisters, Lucy Hutton of Searcy, and Betty Collins of Forrest City. He is also survived by his grandchildren, Drake Midgett and Chandler Odom both of Bowling Green, Kentucky and his best buddy, Bandit. He was preceded in death by his parents, Arthur and Bertha Goe, brothers, Arthur, Billy, and John Goe and sister, Mary Jones. Visitation will be held on Monday, February 3, 2020, from 11 am until 1 PM at Kernodle Funeral Home. Funeral services will follow at 1 pm and burial will be in Harris Chapel Cemetery.

The family of James D Goe created this Life Tributes page to make it easy to share your memories.

Send flowers to the Goe family.