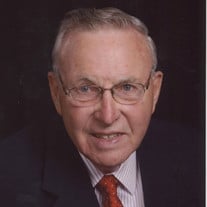 James Harold “Coddie” Caldwell, age 89, went to Heaven in Jonesboro, Arkansas on July 23, 2019. He was born on September 23, 1929 in St. Louis, Missouri and grew up in Union City, Tennessee where he married the love of his life, Alyce Faye Stubblefield, on July 31, 1953. His bigger than life legacy stretches across four generations and is characterized by faith, love, optimism, hard work and adventure. Even as a young man “Coddie” Caldwell was a competitive force with which to be reckoned — lettering in four high school sports, including football, basketball, track and boxing, where he was a light heavyweight amateur Golden Gloves Champion. Following his graduation from Union City High School, James joined the United States Air Force, proudly serving his country from 1949-1952. He was a member of the 56th Strategic Weather Reconnaissance Squadron where he flew 84 weather reconnaissance missions as a drop sound operator, including 39 combat missions over North Korea. While there James earned the rank of Staff Sergeant and received the Air Medal for Meritorious Achievement. As a veteran, he was awarded the Korean War Service Medal on the 50th Anniversary of the Korean War. Back from the war, James leveraged his military service to begin his successful career as a ‘shoe man.’ Beginning in sales for Brown Shoe Company in 1952, he later moved to the manufacturing side of the business, working first in Missouri, Indiana, Tennessee and Arkansas. In 1961, he and his family moved to Wynne, Arkansas where he joined Munro & Company as a plant foreman for Addison Shoe. At Addison, James carved out a 36-year career, moving from fitting department foreman to factory superintendent and managing more than 500 people who produced as many as 6,000 pairs of boots and shoes a day. James’s ‘Factory Family’ was beloved by him. He took pride in the boots the Addison plant made in America for private brands and for the Department of Defense. “Keep up production,” became a Caldwell family mantra for productivity and accomplishment — born out of James’s fierce work ethic and love for his company. As a community servant in Wynne, James was a lifetime member of the Lions Club, serving as Club President in 1978-79. He was a committed member of Wynne Baptist Church where he served as a Sunday School teacher, Awana leader, and greeter and was a member of the Jim Sugg Sunday School class. He and Alyce made the church a pillar in Caldwell family life and valued the Christian friends and spiritual teaching they and their children received. During the late ‘60s and ‘70s, his passion for sports and being a Dad to son, James Charles, inspired him to volunteer as a little league baseball coach. While his teams scored a record number of summer championships, many who played for him better remember the mentoring he provided on and off the field. When a new baseball field was needed, it was also James who led the charge to bring the land and resources together to build Wynne’s first fenced little league baseball field. A long-time supporter of Wynne Yellowjacket Football, James was also a member, volunteer and past president of the Wynne Fumble Club. Known to the family as Granddaddy, James spent 60-plus years as a number one fan to his children, grandchildren and great-grands — showing up for countless occasions, big and small, to cheer them on, provide wit and wisdom, and to help in any way he could. His ‘nothing is impossible optimism’ was constant in the Caldwell home as was his sense of adventure. Some of the best memories of each generation are the many memorable trips taken with Granddaddy and Grandmother as a family and extended family to experience new places and ‘broaden our horizons’. To James, every day brought the best of everything. James taught by his example what the power of inspiration and perspiration applied to any challenge could accomplish. Then, for the grands and great-grands he added the magic of mini-marshmallows sure to cure any ill. James would tell you that his greatest joy and inspiration was his wife of 66 years, Alyce. Their love story and the example they set for commitment to faith, family, friends and community will positively influence and guide their family and friends for generations. James is survived by his wife, Alyce Faye “Stubblefield” Caldwell and three children: Millie Ward and her husband Larry Stone, Debbie Heath, and James Caldwell and his wife Tasha. He had seven grandchildren: Katy (and Travis) Bartlett, Hannah (and Brad) Johnson, Haley Heath, Richard (and Laurie) Caldwell, Sarah Ashley, Gracie and Heidi Holliman. He had 12 great-grandchildren: Elizabeth and Ericka Caldwell; Heather, Elijah and Elliana Johnson; Alyson Bartlett; Clara and Deborah Elise Burks; Daniel, Ellie, Eli and Tristan Duke. He is preceded in death by his parents, Lexie and Vera Caldwell; sister, Ronelle Wells; son-in-law, Von Duke Heath and great-grandson, Duke Elliot Johnson. Visitation and funeral services will be held at the Wynne Baptist Church on Friday, July 26. Visitation will be from 1-2:30 p.m. The Celebration of Life service will begin at 2:30 p.m. Memorials may be made to the Arkansas Sheriffs’ Youth Ranches at P.O. Box 3964, Batesville, Arkansas 72503-9989 and to Wynne Baptist Church at 1200 Bridges, Wynne, Arkansas 72396.

The family of James Harold "Coddie" Caldwell created this Life Tributes page to make it easy to share your memories.