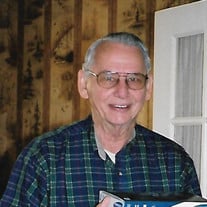 James Eugene Belknap of Wynne, Arkansas, died Friday, June 29, 2018 at his home in Wynne, he was 81. James was born in Blytheville, Arkansas on March 6, 1937 to Raymond Otto Belknap and Louise Ross Belknap. In 1963, James married Darlene Grimmett Belknap. They moved to Wynne in 1974. James was a Civil Engineer for the Highway department for 42 years and also served in the National Guard for 7 years. Survivors are his daughters, Lorri Householder of Jonesboro, Arkansas, Kristie Soto of Wynne, Arkansas, son, Greg Belknap and wife Kim of Southaven, Mississippi, brother, Charles Belknap of Cartersville, Georgia, grandchildren, Tory Wells of Sarasota, Florida, Jacy Arkless of Jonesboro, Arkansas and Cameron Shatswell of Southaven, Mississippi. He was preceded in death by his parents, Raymond and Louise Belknap and wife, Darlene Kaye Grimmett Belknap in 2008. Visitation will be held on Monday, July 2, 2018 at Kernodle Funeral Home from 10 AM until 11 AM. Funeral services will follow at 11 AM with burial in Cogbill Cemetery. Those wishing to send memorials may be made to Winthrop P. Rockefellar Cancer Institute Foundation, 4301 W. Markham #623F, Little Rock, Arkansas 72205.

The family of James Eugene Belknap created this Life Tributes page to make it easy to share your memories.

Customized sympathy cards. Mailed for you.