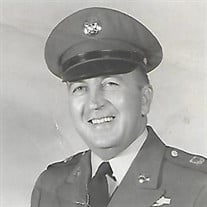 J.T. Tucker of Wynne passed away at his home on Monday, February 18, 2019. J.T. was born in New Albany, MS on June 9, 1923, the son of James Thomas and Corrie Gement Tucker and is preceded by death by them and his two sisters, Mrs. Lucille Tucker McMillen and Mrs. Beulah Tucker Ball. J.T. graduated from Wynne High School in 1943. By now, World War II was in full motion and J.T. joined the war effort by enlisting in U.S. Army. He was assigned as an infantryman with I Company, 275th Infantry Regiment of the 70th Infantry Division, “The Trailblazers.” Because of his outstanding combat leadership during the Battle of the Bulge, J.T. was awarded a battlefield commission. After the war he returned to Fair Oaks only to rejoin the Army again in 1947. J.T. saw action in the Korean War and again in Vietnam. He retired from the Army in 1969 at the rank of Command Sargent Major. During that time he served in duty stations around the world. In 1950 when the Korean War erupted he was off to combat again. A little more than a decade later J. T. was called upon again to serve his country in Southeast Asia in the Vietnam War. In 1969 nearly 30 years service in the U. S. Army. Mr. Tucker retired in Atlanta, Georgia. In 1976 he and his family moved back to Wynne, where he owned Tucker Gulf Station and after that Tucker Furniture. In 1997 he sold the furniture and retired. Because of his time in the military he had a profound love and was very passionate about being with veterans from all service branches. J.T. was a member of the Cross County Veterans Association and was instrumental in having the Veterans Memorial erected at the Cross County Courthouse and the Veteran’s Cemetery at Birdeye. He was a long time member of Wynne Baptist Church. J.T. is survived by his wife of 63 years, Sandra Best Tucker, and his children Tim Tucker of Little Rock, AR, Bobby Tucker (Lisa) of Freeport, FL, Steve Tucker of Washington, D.C., Eddie Tucker, and Janet Tucker from Wynne, and three grandchildren, Amy Tucker, Corrie Tucker, and Tim Tucker, Jr. Visitation will be held on Wednesday, February 20, 2019 at Kernodle Funeral Home from 1 to 2 PM. A funeral service will follow with Rev. Robert Tucker and Kirk Owens officiating. Burial will be in Cogbill Cemetery with full military honors.

J.T. Tucker of Wynne passed away at his home on Monday, February 18, 2019. J.T. was born in New Albany, MS on June 9, 1923, the son of James Thomas and Corrie Gement Tucker and is preceded by death by them and his two sisters, Mrs. Lucille... View Obituary & Service Information

The family of J. T. Tucker created this Life Tributes page to make it easy to share your memories.

J.T. Tucker of Wynne passed away at his home on Monday, February...

Send flowers to the Tucker family.