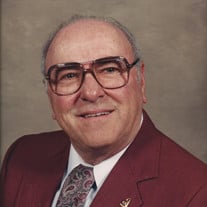 Mr. Horace Daniel Proctor, age 91, of Forrest City, died Sunday, December 6, 2015 at the Forrest City Medical Center in Forrest City. Mr. Proctor was born May 23, 1924, in Wynne, and was the son of Daniel Proctor and Mable Best Proctor. He lived in the Wynne and Forrest City area most of his life. He was a member of Wynne Baptist Church for seventy years, when he moved to Forrest City he attended the First United Methodist Church in Forrest City with his wife, Bettye. Mr. Proctor graduated from Wynne High School and attended the University of Arkansas in Fayetteville until he enlisted in the U.S. Air Force in 1943. After serving thirty months as tail gunner on a B-17 he returned to Wynne to join his dad, Dan Proctor, in the grocery business at Proctor Big Star in Wynne, Arkansas. Mr. Proctor also served as a volunteer fireman with the Wynne Fire Department, retiring after twenty-six years as assistant chief. He also served as a volunteer for twenty-two years. He also served as sports broadcaster for the Wynne High School football games twenty-two years on KWYN radio station. He was also a fifty year member of the Renscllear Van Lodge #454, Little Rock, West Memphis. He was a 32nd degree Mason and was also past president of the Crowley's Ridge Shrine Club and past director of the Royal Order of Juster Court #38 in Pine Bluff. Mr. Proctor married Bettye Toland on October 1, 1978, and had a wonderful life together in Forrest City. She survives him along with two sons; James Randolph Proctor of Wynne and Stephen Craig Proctor of Seattle, Washington, one daughter, Patricia Lynn Proctor Caldwell of Jonesboro, five grandchildren, Jeff Proctor, Ryan Proctor, Scott Farmer, Michelle Farmer, and Seleka Proctor, and six great-grandchildren. He had two sisters; Esther Marie Specht and Deloris Harrelson, who preceded him in death. Services will be held graveside, 2:00 P.M., Wednesday, December 9, 2015 in Cogbill Cemetery. Visitation will be Wednesday, 12:30 P.M. until the time of the service at Kernodle Funeral Home in Wynne.

Mr. Horace Daniel Proctor, age 91, of Forrest City, died Sunday, December 6, 2015 at the Forrest City Medical Center in Forrest City. Mr. Proctor was born May 23, 1924, in Wynne, and was the son of Daniel Proctor and Mable Best Proctor. He... View Obituary & Service Information

The family of Horace Daniel Proctor created this Life Tributes page to make it easy to share your memories.

Send flowers to the Proctor family.