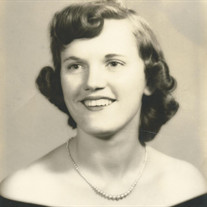 Ms. Hazel Franklin Gray passed away peacefully in Memphis, Tennessee on Saturday, August, 15, 2015 at the age of 78. Hazel is survived by her sons, Doug Gray of Newcastle, Arkansas; Greg Gray of Wynne; daughter, Bridgette Nelson of Colt; brother, Leonard Franklin of Elaine and sister, Evelyn Haynes of Colt; grandchildren, Brian, Elizabeth, Katie, Zeke and great grandchildren, Ada Claire, and Martha Jane. Hazel was born on March 8, 1937 to Gilford “Smitty” Lee Franklin and Martha Ada Ponder Franklin. She lived in Colt, Arkansas for most of her life. Hazel owned and operated Gray & Haynes Grocery Store in Colt, Arkansas and Greg & Jim’s Grocery. She also owned and operated the Country Kitchen in Wynne, Greg & Jim’s in Pinetree and worked as a secretary at the Court House. She was a member of Colt Baptist Church. Visitation will be at Kernodle Funeral Home on Monday, August 17, 2015, from 6 to 8 PM. Funeral services is scheduled for Tuesday, August 18, 2015 at 2 PM at Colt Baptist Church with burial in Hughes Cemetery. In lieu of flowers, the family request memorials be made to the Colt Baptist Church, P. O. Box 283, Colt, Arkansas 72326. Kernodle Funeral Home is in charge of arrangements. You may sign an online guest registry at www.kernodlefh.com

The family of Hazel Franklin Gray created this Life Tributes page to make it easy to share your memories.

Send flowers to the Gray family.