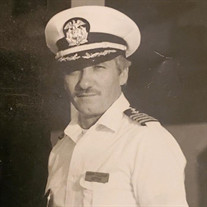 Harry Edward Fulghum, Jr. of Wynne, formerly of Panama City, Florida, died on Monday, December 2, 2019 at his home. Harry was born on August 27, 1946 to the late Harry Edward Fulghum and Claudia Abbott Fulghum. He was a ship captain, U. S.... View Obituary & Service Information

The family of Harry Edward Fulghum, Jr. created this Life Tributes page to make it easy to share your memories.

Send flowers to the Fulghum, family.