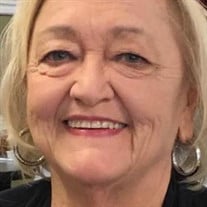 Gloria Jewel Ellis Thomas, 72 years old was born in Wynne, Arkansas on August 14, 1948 and grew up in Jolly Ellis Community. On December 23, 2020, Gloria transitioned to her heavenly life. Gloria loved unconditionally and was known as daughter, sister, aunt, niece, mom, GiGi, GoGo and dear friend to many. Her smile was huge, and laugh was contagious to all who had the honor of meeting her. Once you met her, she was always a part of you. Gloria started playing the piano at Ellis Chapel Church when she was nine. Apart from the few years when she lived in Stuttgart, Germany and Colorado Springs, Colorado, she continued to play the piano and organ at Ellis Chapel and Wynne Presbyterian Church until 2016. She was beyond talented and blessed many playing for all kinds of occasions. She also was a very active member of the Wynne Little Theatre Group and performed with her friends in many productions at the Wynne Progressive Club. Gloria started working for Shaver, Shaver and Smith, Attorney at Law in 1974, where she advanced her career and became a Certified Paralegal Assistant. Gloria was more than a legal assistant to Jim Shaver, Tom B. Smith and J. Harmon Smith, she was family. Gloria dedicated herself to the firm for over forty years. Throughout the years she was very active in Memphis Association of Legal Secretaries, Tennessee Association of Legal Secretaries and National Association of Legal Secretaries. Gloria developed very special friendships that only grew stronger throughout the years. Gloria retired due to her health. Being the strong woman she was, she overcame numerous hurdles and would not let anything stop her from using her skills. This past year she began working for a lifelong dear friend, Bobby Caldwell, at East Arkansas Broadcasters (KWYN). She loved being a part of the close family environment they have. Gloria’s life revolved around family and friends. She enjoyed being present and involved with every activity possible that her daughter, grandchildren and great-grandchildren were a part of. She was preceded in death by her parents, Berger Rivers Ellis and Laurel Jewel Brown Ellis, her brother Ira Berger Ellis, her sister-in-law, Barbara Ann Davis Ellis, her infant son and her Unknown Hero that gave her the Gift Of Life. She is survived by her aunt Nina Spencer of Wynne; brother, Riley Paul Ellis of Wynne; sister-in-law, Diana Ball Ellis of Wynne; daughter Stephanie Stevens (Michael) of Marion; grandsons, Tucker Thompson (Rachel) of Crawfordsville, Tyler Thompson (Chelsea) of Earle, Brandon Stevens (Allison) of Ward and granddaughter Adrienne Lung (Chad) of Paragould; great granddaughters, Halli Lung, Hayden Lung and Henleigh Lung and great grandsons, Ellis Thompson and Holden Thompson; her nieces Donna Imboden (Pete) of Wynne, Robin Ellis of Astoria NY, Lori Taggart (Alan) of Augusta, Merikay Campbell (Watty) of Houston,her nephews Phil Ellis (Donna) of Vilonia, Chris Ellis (Lisa) of Conway, Paul Ellis (Dallas) of Wynne and Tony Ellis (Amanda) of Marion, and numerous family and friends that she loved dearly. Visitation will be held on Sunday, December 27, 2020 from 5 to 7 pm at Kernodle Funeral Home. Family graveside will be held Monday, December 28, 2020 at 11am at Ellis Chapel Cemetery, followed by a Community Celebration of Life Praise Service at Wynne Presbyterian Church at noon. Memorials can be made to Ellis Chapel Cemetery, 608 Hwy 193, Wynne Arkansas, Give Organs Give Life, 3615 Laural Ridge, Springdale, AR 72764 or Mid-South Transplant Foundation, Inc., 8001 Centerview Parkway, Ste 302 Cordova, TN 38018.

Gloria Jewel Ellis Thomas, 72 years old was born in Wynne, Arkansas on August 14, 1948 and grew up in Jolly Ellis Community. On December 23, 2020, Gloria transitioned to her heavenly life. Gloria loved unconditionally and was known as daughter,... View Obituary & Service Information

The family of Gloria Jewel Ellis Thomas created this Life Tributes page to make it easy to share your memories.