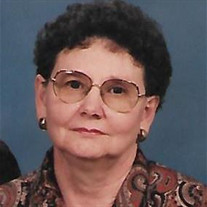 Ms. Glenda Faye Tarwater of Hickory Ridge passed away Friday, December 21st in Jonesboro, Arkansas. Glenda was born on May 14, 1937 to the late Claude and Kattie Mae Marsden Holleman in Hickory Ridge, Arkansas. In 1954 she married Mr. C. M Tarwater and they had three children, Carolyn, Allen and Bruce. She lived in Hickory Ridge all her life and was a member of the Cross County Home Extension Club and the Hickory Ridge Church of Christ. She is survived by her sons, Allen Tarwater of Hickory Ridge, Bruce Tarwater of Cherry Valley, brothers, Jimmy Holleman and Bob Holleman both of Hickory Ridge, sisters, Betty Ford of Hickory Ridge, Peggy Dixon of Fisher, grandchildren, Angela, Laura, Candice, Dave, Matt, Jason and 14 great grandchildren. She was preceded in death by her parents, Claude and Kattie Mae Holleman, husband, C. M. Tarwater, and daughter, Carolyn Baughn. Visitation will be held on Monday, December 24, 2018 from 10 to 11 AM at the Hickory Ridge Church of Christ with funeral services to follow at 11. Burial will follow in Lewis Cemetery. Kernodle Funeral Home is in charge of arrangements.

The family of Glenda Faye Tarwater created this Life Tributes page to make it easy to share your memories.

Send flowers to the Tarwater family.