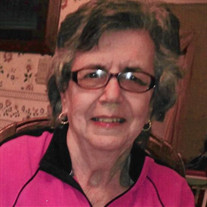 Ethel Lynn Todd Tutor of Wynne died on July 6, 2019, in Jonesboro, Arkansas at Flo & Phil Jones Hospice House. Lynn was born on December 11, 1941 to the late R. C. Taylor and Catherine Smith Taylor. Lynn born and raised in Earle, Arkasnas, and was a proud 1959 Graduate of Earle High School, home of the Bulldogs. She moved to Parkin, Arkansas, where she raised her boys, Michael and Jeff. Lynn worked for the U. S. Postal Service for 30 years. She married Mr. George Tutor in 1985 and they loved to travel and play cards. She was a member of Union Avenue Baptist Church. She is survived by her sons, Michael Todd and wife Holly of Paragould, Jeff Todd and wife Tracy of Henderson, Arkansas, stepson Tony Tutor and wife Lynn of Wynne, stepdaughters, Kathy Boeckmann of Wynne and Mona Boeckmann Smith of Harrison, Arkansas. She is also survived by her sister, Janet Coalter of Brandon, Mississippi, grandchildren, Ginger Thorton and husband Aaron, Hanna Todd, Morgan Wilcoxson and husband Eric, Luke Todd and great grandchild, Kennedy Thornton. She was preceded in death by her parents, R. C. Taylor and Catherine Taylor, sisters, Shirley Roeder and Mary Lou Fischer and husband, George Tutor in 2014. Visitation will be held on Thursday, July 11, 2019 at Kernodle Funeral Home from 10 AM until 11:30 AM. Funeral services will be held at 11:30 AM on Thursday, July 11 2019 with burial in Cogbill Cemetery. Memorials may be made to Flo & Phil Jones Hospice House, 1148 E Matthews Ave, Jonesboro, AR 72401.

The family of Ethel Lynn Tutor created this Life Tributes page to make it easy to share your memories.

Send flowers to the Tutor family.