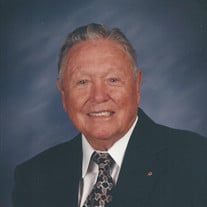 Ernest Durrell Free, a resident of Wynne, Arkansas, departed this life, Wednesday, November 23, 2016. He was born, May 30, 1917 in Vardaman, Mississippi, the son of sharecropper William Jackson Free and Loudine Vanlandingham. Ernest joined the Army Air Corp in 1941 where he served as a flight engineer on a B24 Liberator and completed his 25 missions. Upon his discharge he attended Mississippi State University where he obtained a BS in Agriculture. He left school and relocated with his wife, Dean and 2 daughters to Wynne where he taught veterans agriculture in the Vanndale schools. He started Wynne Flying Service in Arkansas. He was instrumental in the development of the Wynne airport and served as President of the airport Commission for over 25 years. He started the Farmers Supply company which served as a hub for off season farmers to engage in billiards, ping pong, and dominos and developed the first white cotton doffer which was sold and distributed throughout the cotton growing industry. He served on the Arkansas Game & Fish Commission Board, District Governor of the Lions Club, District Governor of MS Agriculture and Industrial Board and served Cross County as their Red Cross representative for over 50 years. He was Vice President of the Delta Highlands Region and was instrumental in creating interest that eventually became Village Creek State Park, Arkansas’s largest. He was preceded in death by wife, his parents, and siblings. Ernest is survived by his two daughters: Judy Palmer and husband Rick, of Cherry Valley, Susan Mixon and husband Daryl, of Mt View, 2 brothers: Roy Free of Batesville, MS, Ray Free of Houston, MS, 4 grandchildren Kathy Frankenstein Halfspring, Nicki Rolley Thielen, Carolyn Frankenstein Caubble, and Wendy Rolley Schroeppel, 6 great grandchildren and companion Evelyn Landers. Visitation will be held Monday at Wynne Baptist Church from 1 PM to 2 PM with funeral services to follow at 2 PM. Interment will be held at Cogbill Cemetery in Wynne, Arkansas. Memorials may be made to Wynne Baptist Church, 1200 Bridges Avenue, Wynne, Arkansas 72396 or First United Methodist Church of Wynne, 800 N. Falls Blvd, Wynne, Arkansas 72396.

The family of Ernest Durrell Free created this Life Tributes page to make it easy to share your memories.

Send flowers to the Free family.