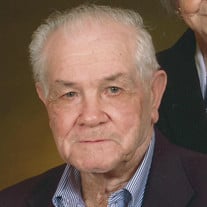 Earnie Waldrep of Wynne, Arkansas, died Monday, July 25, 2016 in Jonesboro, Arkansas at the age of 93. Earnie was born in Wynne, Arkansas on February 23, 1923 to Gaynor Brackin Waldrep and Bertha Gertrude Sanders Waldrep. He raised peaches for more than 30 years and retired from the Arkansas Highway Department after 30 years. Earnie was saved in 1952 and was a faithful and long time member of Antioch Baptist Church, where he helped build two churches. He was dedicated to his church and his family. He was preceded in death by his wife of 65 years, Betty Jean Robbins Waldrep on October 22, 2011 his parents, two brothers, Robert Mauppins and Roy Waldrep, sisters, Flora Thomas and Naomi Armstrong. He leaves a son, Rickey Waldrep and wife Vicki of Wynne, daughter Connie Cox and husband Larry of Heber Springs, grandchildren, Chris Waldrep and Kim Waldrep both of Wynne, Jason, Lance, and Matthew Cox all of Heber Springs, great grandchildren, Lani and MaKayla Waldrep all of Wynne, Halle Cox and twins, John and Carter Cox, Logan Cox and Lindsey Cox all of Heber Springs and sister, Ruthie Moline Moore of Wynne. Visitation will be Wednesday, July 27, 2016 from 10 AM until 11 AM at Antioch Baptist Church with funeral services following at 11 AM. Burial will be in Harris Chapel Cemetery. In lieu of flowers, the family request that memorials be made to Antioch Baptist Church, 4405 Hwy 284, Wynne, Arkansas 72396.

The family of Earnie Brackin Waldrep created this Life Tributes page to make it easy to share your memories.

Send flowers to the Waldrep family.