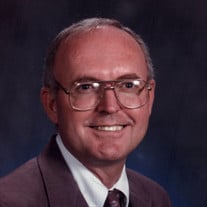 Douglas Wayne Smith, 72, went to his Heavenly home on Friday, April 22, 2022. He lived most of his life in Cross County. He was born on October 5, 1949, to Presley Smith and Lorene Smith. He married Frances Gibson Smith on, June 4, 1994. He graduated from Vanndale High School in 1967. He graduated with a Bachelor's degree from Arkansas State University in 1971 and a Master's degree in 1980. He completed his Administrator's License in School Administration in 2001. During his 36 years in education he served in the classroom for 16 years and in Administration for 20 years. Doug enjoyed having a garden and working in the yard. He also loved to cook, can vegetables and make jelly. His favorite thing to do was bake cakes and cookies. Douglas was preceded in death by his parents and two sisters, Rudeen Lloyd and Wanda Orr. Survivors include his wife, Frances Smith; daughter, Tanya Jarrett of Wynne, and son Bryan Jarrett and wife Haley of Dallas, Tx; five grandchildren, Brooke Rexroat and husband Nathan, Traci Crowder and husband Tyler, Cadyn Jarrett and wife Madison, Gavyn Jarrett and Addisyn Jarrett; four great-grandchildren, Jarrett and Ragan Rexroat, and Jase and Sawyer Crowder and a host of nieces and nephews. He is also survived by five brothers; Charles Smith and wife Glenda, of Pangburn, Roger Smith and wife Machelle, Ricky Smith and wife Alice, Erie Presley Smith and wife Robin and Randall Smith all of Cherry Valley. Pallbearers will be Mike McGhehey, Lonnie Gibson, James Reeves, Dick Bonady, Willie Danos, James Wilson. Rev. Matt Hodges, Rev, Roger Smith, and Rev. Dr. Bryan Jarrett will officiate. Visitation will be held on Wednesday, April 27, 2022, at Kernodle Funeral Home, from 1 to 2 PM. Funeral services will follow at 2 PM at Kernodle Funeral Home. Burial will be in Loughridge Cemetery in Colt, Arkansas. Memorials may be made to the Lonesome Dove Ranch, P. O. Box 99, Wylie, Texas, 75098. The Lonesome Dove Ranch is a children's charity that serves abused and neglected in the foster system. They meet spiritual, physical, and emotional needs of children while helping them find forever families in the adoption process. Kernodle Funeral Home is in charge of arrangements. You may sign an online guestbook at www.kernodlefh.com

The family of Douglas Wayne Smith created this Life Tributes page to make it easy to share your memories.

Douglas Wayne Smith, 72, went to his Heavenly home on Friday,...

Send flowers to the Smith family.