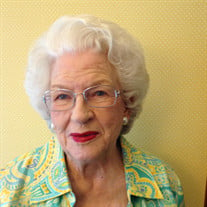 Donna Ellis Orbison, age 91, was born on August 21, 1924 to Owen and Christine Ellis of Pine Tree, Arkansas and died in Dallas, TX on May 26, 2016. She is preceded in death by her husband Joseph R. Orbison and son, Jonathan R. Orbison. Donna graduated from Wynne High School in 1942 and moved to Memphis, TN where she completed Business College. In World War II she joined the WAVES and served in the Navy reserves. She worked at Sears and Roebuck, Company in Memphis until she married Joe Orbison of Jonesboro, Arkansas in 1952. They lived in Corpus Christi, TX for 30 years and were active members of the First Christian Church. While raising her family, she was a cosmetic consultant for Luzier, Inc. and lead the company in national or regional sales for several years. She was awarded international travel and a new car for her achievements. She was involved with the Girl Scouts of America, serving as troop leader for her daughters and then Den Mother for her son’s Cub Scout troop. She also volunteered in various service and social organizations, including the Eastern Star, Beta Sigma Phi, the Little Theatre of Corpus Christi, and others. She and Joe thrived and survived in the boom/bust Texas oil industry and moved to Caldwell, TX in 1982 where they retired. After her husband’s death, Donna moved to Austin, TX in 1996, where she once again made many strong friendships, as she did all her life. She had a life rich with wonderful friends, loving family, cooking, bridge and other social events. She was also a proud breast cancer survivor of over 31 years. After living in Austin for many years she moved to Grand Prairie, TX and more recently to the Memory Care unit of Juliette Fowler Communities in Dallas, TX. Donna is survived by her daughter Rev. Christal Orbison Fisher and husband Donald R. Postell of Grand Prairie, TX; daughter Dr. Diane Orbison Tyler and husband Larry W. Smith of Liberty Hill, TX; granddaughter Dr. Christine Fisher and husband Dr. Galen Wachtman of Austin, TX; granddaughter Laura Fisher Clark and husband Matthew Clark of Lafayette, CO; great grandchildren Grant, Luke and Annelise Wachtman and Theodore Clark; sister Shelby Ellis Ray and husband John R. (Bobby) Ray of Brinkley, AR; brother Richard O. Ellis and wife Margaret Irene Thompson Ellis of Tulsa, OK; niece Terry Geisler and husband Bubba Geisler of Brinkley, AR and their children; niece Jennifer Ellis Stevens and husband Mike Stevens of McKinney, TX and their children; niece Christina Ellis Abel and husband Dave of St. Louis, MO and their children; Adam Richard Ellis of McKinney, TX and children, and many very dear friends. A service to celebrate her long and loving life will be held on Sunday, May 29, 2016, at 2 PM at Kernodle Funeral Home in Wynne, Arkansas. In lieu of flowers, donations can be made to Barnishaw Cemetery or Faith Presbyterian Hospice in Dallas. She touched many lives and we will miss her grace, love, friendship and kindness, which she shared generously.

Donna Ellis Orbison, age 91, was born on August 21, 1924 to Owen and Christine Ellis of Pine Tree, Arkansas and died in Dallas, TX on May 26, 2016. She is preceded in death by her husband Joseph R. Orbison and son, Jonathan R. Orbison. Donna... View Obituary & Service Information

The family of Donna Eillis Orbison created this Life Tributes page to make it easy to share your memories.

Send flowers to the Orbison family.