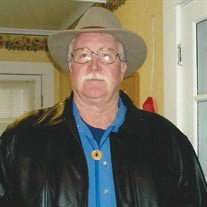 Darrel Wayne Andrews, 59, of Forrest City, Arkansas, passed away March 24th at St. Bernards Regional Medical Center in Jonesboro, Arkansas. Darrel was born September 6, 1956 in Wynne, Arkansas. He was the son of H. J. and Lydia Andrews of Tilton, Arkansas. He graduated from Cross County High School in Cherry Valley in 1974 with honors. He completed the Baptist Seminary training in Little Rock, Arkansas, and also was a music major at Southern Arkansas University in Magnolia, Arkansas. Darrel owned a service station at Colt, Arkansas for many years before going in to the bail bonding and bounty hunting business. Darrel was an avid pet lover. Darrel was a member and past Master of Forrest City Lodge #198 and a dual member of Rensellear Vann Lodge #494. He was a 32nd degree Scottish Rite Mason of the Valley of Jonesboro. Darrel was a member and past patron of Crowley’s Chapter #625 order of the Eastern Star in Harrisburg, Arkansas. He was preceded in death by his wife, Lee Anna Andrews. Survivors are his parents, H. J. and Lydia Andrews of Tilton, Arkansas; brother, Dennis Andrews of Tilton, Arkansas; sisters, Darlene Andrews of Wynne; Diane Andrews Hedge and husband Ronnie of Weiner, Arkansas; Debbie Andrews Hedge of Wynne, Arkansas; daughter, Betty Gail Lemke and husband John of Wynne, Arkansas; sons, Billy Wayne Andrews and wife Jackie of Forrest City, Arkansas; Bryan Andrews and wife Leslie of Wynne, Arkansas; six grandchildren, several nieces and nephews and many other family and friends that loved him. Visitation will be Sunday, March 27, 2016, at Kernodle Funeral Home from 6 PM until 8 PM. Funeral services will be Monday, March 28, 2016 at 2 PM at Kernodle Funeral Home with burial in Loughridge Cemetery in Colt, Arkansas with Masonic Services.

The family of Darrel Wayne Andrews created this Life Tributes page to make it easy to share your memories.