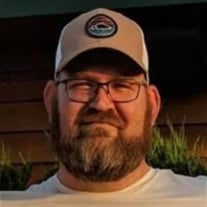 Mr. Dalton Matthew Wizer, 44, of Wynne, died on Wednesday, July 28, 2021, in Jonesboro. Dalton was born in Wynne, Arkansas, on September 22, 1976, to Melvin Tim Wizer and the late Gloria Ethridge Turner. Dalton served 8 years (1997 to 2005) in the United States Navy and received numerous awards and ribbons. He was a hard worker and loved taking care of his family. He was a motorcycle enthusiast and loved hunting and fishing. Dalton was a family man and loved spending time with them. He is survived by his wife of 19 years, Amanda Laske Wizer of Wynne, children Cody Matthew Wizer and Ally Elizabeth Wizer both of Wynne, father, Melvin Tim Wizer and wife Cheryl of Hornlake, Mississippi, stepfather, Fred Turner of Wynne, brothers, Jason Tim Wizer and wife Tammy of Wynne, Chad Turner and wife Terri of Wynne, Clint Ward and wife Amy of Mississippi, sister, Christen Montoya of Hornlake, Mississippi, and several nieces and nephews. He was preceded in death by his mother, Gloria Ethridge Turner, paternal grandparents, Melvin and Betty Wizer and maternal grandparents, James and Lola Mae Ethridge. Visitation will be held at Kernodle Funeral Home on Sunday, August 1, 2021, from 6 to 8 PM. Funeral services will be held at Kernodle Funeral Home Chapel on Monday, August 2, 2021, at 11:30 AM with burial in the Arkansas State Veterans Cemetery at Birdeye in Cherry Valley with military honors. Memorials may be made to the American Cancer Society, online at donate3.cancer.org or by phone at 800-227-2345.

The family of Dalton Matthew Wizer created this Life Tributes page to make it easy to share your memories.

Send flowers to the Wizer family.